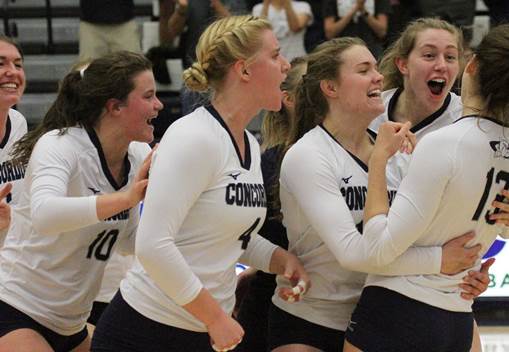 SEWARD, Neb. – It took a while to get back to this point, but here they are, just as University of Nebraska head volleyball coach John Cook predicted. Concordia landed at No. 17 in the NAIA volleyball coaches’ poll released on Wednesday (Oct. 23). The Bulldogs had not appeared inside the top 25 since the 2016 preseason ranking. Having received votes in the previous rating, Concordia made a huge leap by garnering 266 points in the poll.

Back in late 2017 when Ben Boldt and Angie Boldt came on board to lead the Bulldog program, Cook stated that the Boldts would “create another nationally-ranked NAIA team in Nebraska.” Those words have proven prophetic with Concordia now 19-3, equaling the program’s best 22-match record during the GPAC era (2000-present). The Bulldogs also reside in third place in the rugged GPAC with an 8-3 conference mark.

Concordia certainly had to earn its way into the top 25. The Bulldogs have done so by knocking off seven teams that were ranked at the time matches were contested. Based on the current poll, Concordia owns wins over No. 12 Corban University, No. 20 Dordt, No. 24 Midland and three additional victories over “others receiving votes” in College of Saint Mary (twice) and Morningside. The Bulldogs are actually ranked No. 5 in the NAIA by Massey Ratings.

The program’s highest ever national rating during the GPAC era was 12th back in 2000. That Concordia squad, coached by Becky Ernstmeyer, went on to share the GPAC regular-season title.