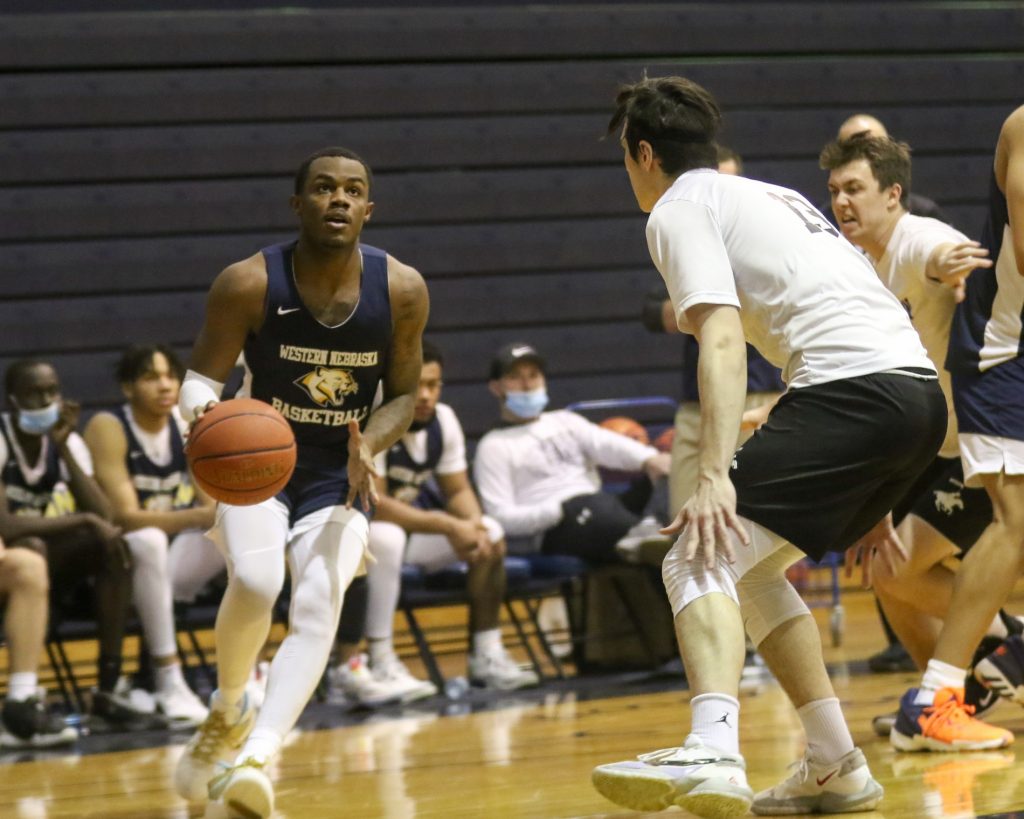 It has been an extremely long wait for the Western Nebraska Community College men’s basketball team, but when Wednesday, January 20 comes along, the Cougar men will be ready to open the season when they host Central Wyoming College.

Billy Engel, interim head men’s basketball coach, said the team is looking for the season opener and get the abbreviated season started.

“I think the guys on this roster have been sitting and waiting to play since last February,” Engel said. “These guys have been anxious, patient, and have shown up to practice each day competing with each other. I think these guys are ready to go out there and play against somebody else.”

This year’s Cougar team will be one with plenty of new faces on the roster compared to last year. WNCC returns just two players from last year’s 19-12 team in Tayler Johnson, a 6-foot-2 guard from Minneapolis, Minnesota, and Conner McCracken, a 6-4 guard from Scottsbluff.

WNCC also have a transfer sophomore that came in at semester in Issad Solano, a 6-3 guard from Bayamon, Puerto Rico. Solano played last year at Daytona State College.

Engel said the three sophomores will be key pieces to the puzzle.

“Taylor and Conner have shouldered a lot of responsibility in practices and workouts and lifting sessions,” Engel said. “Those are the two kids that were here last year that know how we do things and they took on a lot of responsibilities to be leaders and make sure guys fall in line. We also brought in another sophomore in Issad Solano. He has some high-level playing experience and is really good to add to this roster. It has been nice to have some freshmen that are willing to learn and listen to some older guys, and when we show up competitive, it makes things a little bit easier.”

With just three sophomores with college playing experience, the development of this team will fall with the nine freshmen on the roster. The Cougars have a lot of talent with the newcomers, including four players from in-state Nebraska and other three from neighboring states of Colorado and Wyoming.

“There has been handful of freshman that have shown a lot so far in just a little over a semester,” Engel said. “Chase Thompson from Omaha is a kid with a lot of talent and high-level scoring ability. Them Koang from Grand Island is extremely athletic and extremely strong and is starting to showcase his skills more and more. Agwa Nywesh from Minnesota still has a lot to grow and a lot to learn, but he is an athlete kid that can score the ball and does things the right way at point guard. I am very optimistic about these young men.”

The freshmen have plenty of talent. The four players from Nebraska on the squad include Thompson, who is a 6-7 wing player from Omaha Westside High School, Koang, a 6-7 center from Grand Island High School, Carter brown, a 6-2 guard from Ogallala, and Jasiya DeOllos, a 5-11 guard from Scottsbluff.

The Wyoming payer is Michael Bradley, a 5-10 guard from Casper Kelly Walsh, while the Colorado products are Turumbil Zaki, a 6-5 forward from Denver South High School and Sayo Owolabi, a 6-4 guard from Vista Peak Prep in Denver.

The rest of the team included Tyler Mack, a 6-4 guard from Clinton, Michiga, and Agwa Nywesh, a 6-3 guard from Austin, Minnesota.

Engel said they have the pieces to do well this season, but it will be a challenge in a season where nothing is guaranteed.

“We are still yet to find out how good we will be. We only had a couple competitive opportunities. Every time we have competed, it has been after a long break and not a lot of practices,” Engel said. “I am optimistic that we are yet to see the best of this team. We have enough pieces to be a really solid basketball team this year, but we have to keep getting better day-by-day.”

Wednesday’s opponent, Central Wyoming College, who was 20-11 a year ago, will bring a talented team into Cougar Palace for the 7:30 tip-off. Engel said the key is for his team to play well.

“The big concern right now is making sure we are taking steps forward and we are continuing to get better every day,” Engel said. “We have to sharpen up some of the things we were good at in our first scrimmage last semester, and some things we weren’t good at in our scrimmage against EWC, There is limited film on Central so far this year, but I know coach [Brad] Schmit has done a good job the last couple of years. We are going to have our hands full on Wednesday.”

After Wednesday, WNCC will face another stiff test the following week. The Cougars will host Eastern Wyoming College on Jan. 26 and then face College of Southern Idaho on Jan. 28 at Cougar Palace. The Lancers topped the Cougars in a scrimmage on January 7 and Engel knows that this year’s schedule is not going to be easy with just 22 regular season games on the docket.

““EWC demonstrated in our scrimmage and CSI is a perennial top 10 team in the country,” he said. “Then going on the road to Casper. Plus, NJC is going to be very good. There will be a lot of good teams in the league this year, so we definitely will have our hands full.”

Engel said with everything that the team has gone through, he is just excited to get the season started.

“There are so many question marks this season, so much up in the air,” Engel said. “It will be interesting to see how this plays out. I am just excited to finally to get rolling and get our first game underway.”