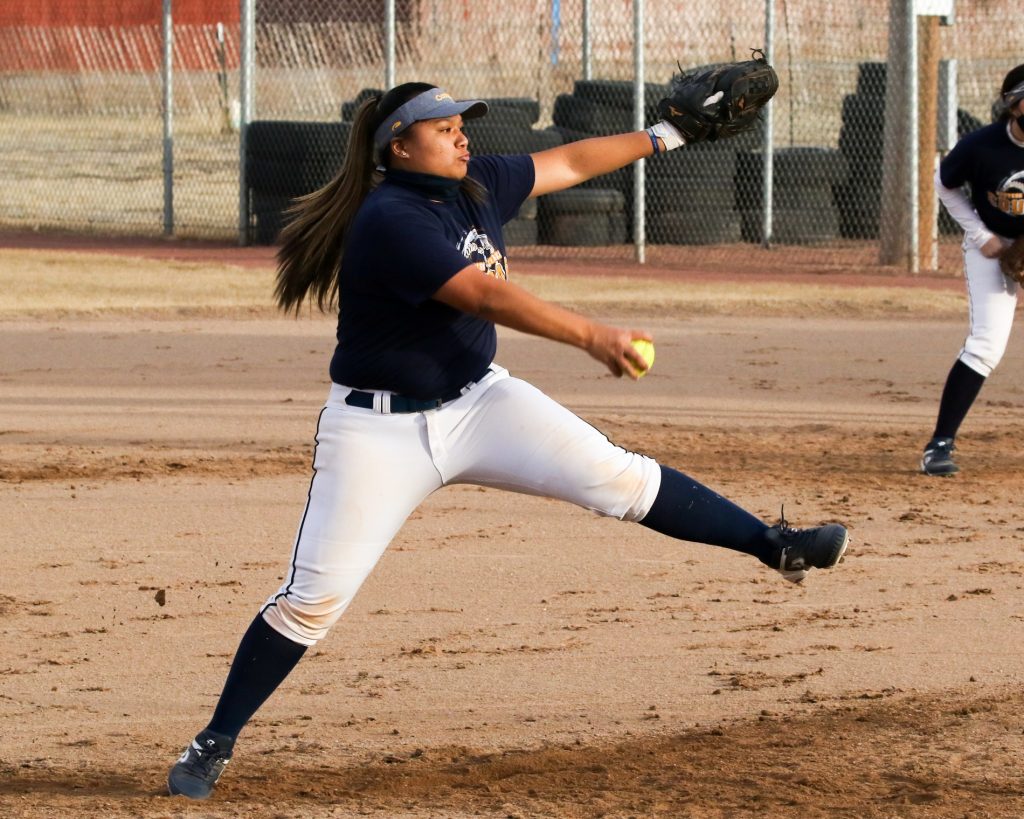 The Western Nebraska Community College softball team have endured the cold and snowy weather the past couple weeks and have still did their best to work out. But, when this weekend hits, the players will be anxious to finally hit the diamond and play the sport they love.

WNCC will open the season when they face Midland College and Pratt Community College in Midland, Texas, on Saturday and Sunday. The Cougars will then face Western Texas on Monday.

This weekend’s games will be the first competitive games WNCC has competed in in nearly a year. The Cougars last competitive games came March 12, 2020, when they lost a doubleheader to McCook Community College on the road. It was also the day the NJCAA suspended the season due to the COVID-19 pandemic and later in April canceled the season.

To say the least, this year’s team is excited to get going according to head coach Katelyn Groves.

Groves said Midland and Western Texas will be teams that will be tough and a good test for your young team.

“Midland is always a tough team,” she said. “Historically they run well, pitch well and hit well. We expect them to continue to do that. We open together on the 20th and they return quite a few players from last year’s squad that performed well against us last spring before Covid shut us down. It will be a competitive opening weekend.”

What makes this year fun to watch is a team of 12 players that love to play the game of softball and will give their all to compete. Groves said there is a lot of potential to this team.

“This group is extremely talented and has all the potential in the world,” she said. “Consistency in energy levels and performance will be a huge key – like any team, the team that can do the little things in the most constant way will win a lot of ball games. With a talented group like this, making a run at a regional title and winning games is something we expect but we will have to learn to do things together and have a WE mentality to get it done.”

This year’s team is very young, too. The Cougars return just one player back from a year ago in outfielder Mackenzie Bakel from Thornton, Colorado. Bakel appeared in all 12 games a year ago and had a .366 batting average.

The rest of the lineup will be comprised of newcomers with plenty of talent.

The list starts with three freshmen pitchers that will see the bulk of the action in the circle. They include Lexi Butterfield from Lehi, Utah, Chayden Chong of St. George, Utah, and Ashley Quinn of Aurora, Colorado.

Groves likes what they bring to the table.

“We have three young ladies that will all be key in our team’s success this upcoming season,” she said. “They will all provide a different look in the circle that will hopefully keep teams off balance and give us opportunities to make plays.”

The rest of the roster included plenty of talent. They include Bella Coffman of Aurora, Colorado, Chloe Cronquist of Blackfoot, Idaho, Cameron Lyons, Cheyenne Ausborn, and Emma Schweitzer all of Aurora, Colorado, Bailey Blachard of Elizabeth, Colorado, Briana Henson of Feilding, New Zealand, and Erin Hanafin of Firestone, Colorado.

Lyons will red-shirt this season, making a roster of 11 players.

With a small roster, staying healthy will be key. But the team is just excited they get a spring season and chance to play while some teams won’t have a season this spring.

Groves said for this team to be successful, they need to adapt and overcome the hurdles that they will face during the season.

“Our focus is to take it day by day and continue to grow and become the best versions of ourselves as a team,” she said. “It’s been a crazy year for everyone around the country; some teams won’t be getting a spring season so all-in-all, we’re lucky and very thankful. We are missing Volunteer Field, but we have a great indoor facility that affords us the opportunity to get work done and see progress daily. We definitely are ready to back on a field this weekend and compete, one day at a time.

WNCC wills stay on the road for nearly a month before they will have their home opener on March 20 when Northeastern Junior College comes to Volunteer Field. The team will wrap up the regular season on May 1 when they face McCook.

The goal is to make the national tournament, which this year will be held in Yuma, Arizona.