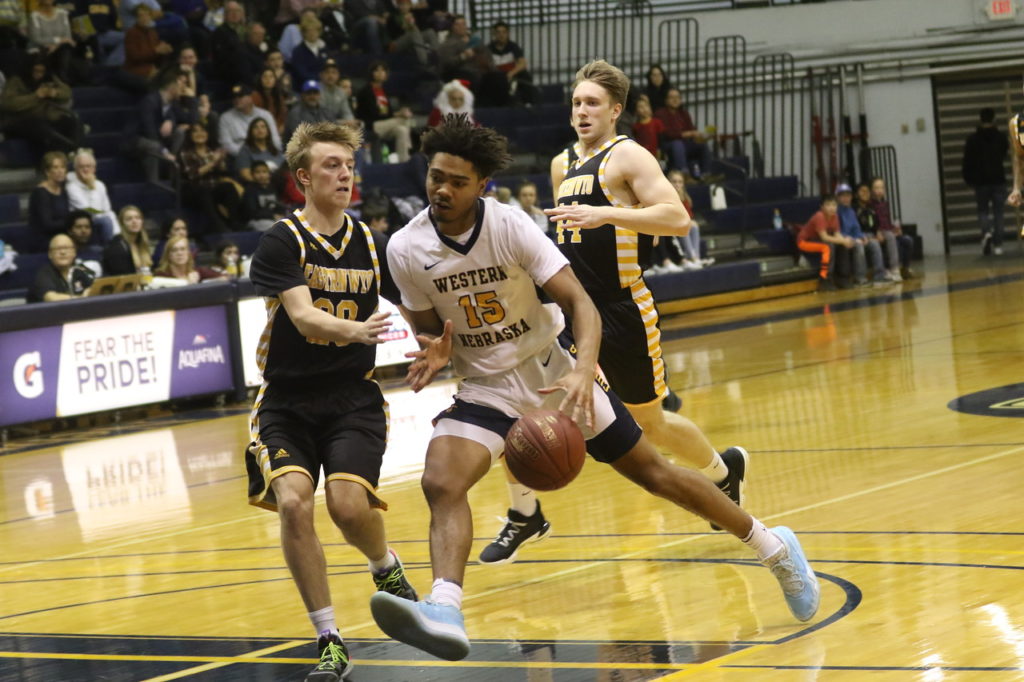 The Western Nebraska Community College men’s basketball team led from start to finish, but had to fight off comebacks from Eastern Wyoming College all night long in registering an 82-69 win Monday night at Cougar Palace.

Teddy Allen led the Cougars with a double-double of 34 points and 10 rebounds, but more importantly was 14 of 15 from the charity stripe.

We didn’t shoot as well tonight because we are usually 50 percent from the field,” WNCC head coach Cory Fehringer said. “Teddy didn’t do as well tonight. He struggled around the rim. He has been sick the last couple of days and didn’t get his repetitions in the last few days, but that is what happens when you don’t get your reps in and you can struggle from the field. But I am proud of him stepping up at the free throw line and going 14 of 15, getting 10 rebounds, and helping us out on the offense glass with six boards as well.”

Defense was a big key in the contest for the Cougars, too, and Fehringer was pleased with the determination his team had in the game.

“You have to give our guys credit where credit is due,” Fehringer said. “We have been grinding on them to have more pride in their defense pressure especially on the home court. Our crowd expects us to play rough, tough basketball and not give up easy baskets. Nobody should come in here and get an easy basket. I am just proud of our guys with the determination to come out and play hard tonight.”

EWC head coach Tim Moser said his team is still in the growing mode, but was pleased with how hard his team played against a talented WNCC squad.

“We are growing as a group. We are still trying to get focused on the little things against a team like that which has that much firepower,” Moser said. “They have Teddy Allen, and when you take a couple of possessions off that is the difference in the game. In the second half we took about seven possessions off and that is the difference in the game. We just have to keep growing and growing and growing. All my hats off to Cory, he is doing a heck of a job with you guys.”

The Lancers came fighting back, cutting the lead to 44-41 at the half in closing out the first half on a 8-2 run.

WNCC had three players in double figures. Allen led all scorers with 34 followed by Strawbridge with 14 and Elie Cadet with 11.

EWC also had three in double figures. David Hook led the way with 13 points, followed by Tiley and Jordan Potts with 12 points each.

WNCC, 9-5, will be back in action on Jan. 4 when they travel to Cheyenne, Wyoming, to face Laramie County Community College.