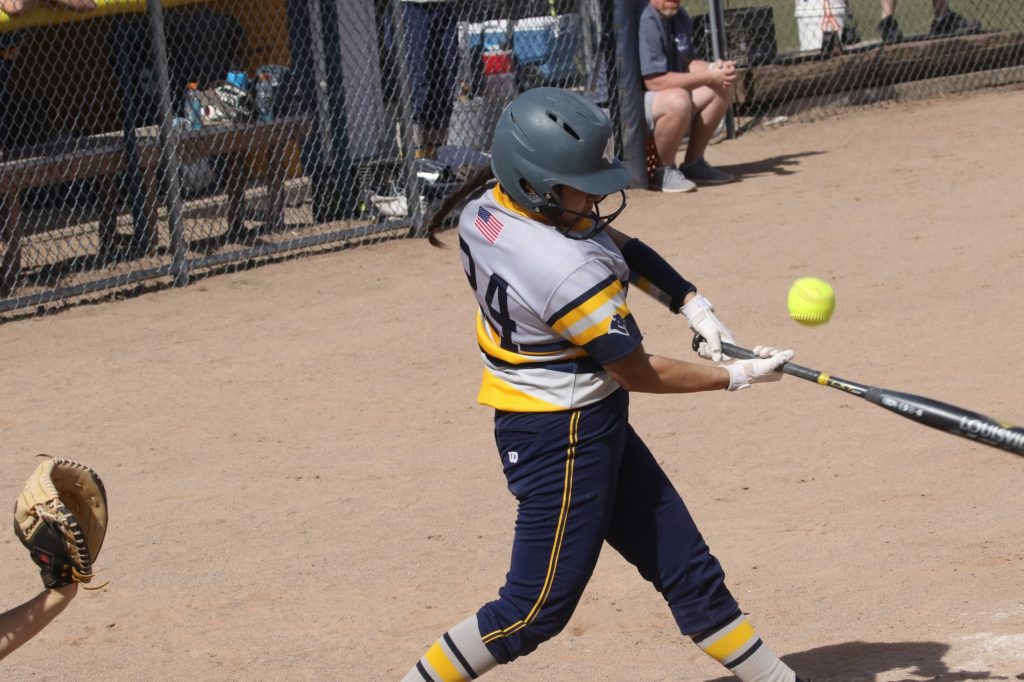 The Western Nebraska Community College softball team couldn’t get the big hit when they needed in dropping a doubleheader to Western Texas College Saturday at Volunteer Field.

The first game saw Western Texas get 12 hits and scored in five of the six innings in registering the 14-2 win.

The second game saw WNCC outhit Western Texas 14-12 including a 4-for-4 game by Sidnee Hogan, but the Westerners scored five, sixth-inning runs to earn the 10-5 win.

WNCC, 4-8, will be back in action this weekend when they have a conference road trip to Trinidad State on Friday followed a trip to Lamar on Saturday and then McCook on Sunday.

The first game saw Western Texas score four first inning runs and that was all they needed in registering the win. The Westerners pounded out 12 hits, including two home runs.

WNCC also some good hits but couldn’t get the clutch hit when they needed it.

Western Texas led 4-0 after one and build a 7-0 lead through 3 ½ innings before the Cougars got on the scoreboard with one run. Maizie Clark led off with a walk and then Sam Davis singled. Tylar Davis then singled in Clark for the Cougars first run.

Western Texas added a single run in the fifth and then put the game away with a six spot in the sixth. WNCC tried coming back in the sixth as Sam Davis homered and Tylar Davis singled, but that was all the offense they could get.

The second game started out better for the Cougars. Western Texas scored first with a run in the first, but WNCC came out and scored twice in the bottom of the first. Hogan led off with a single followed by a double by Comeau. Hannah Baesler scored Hogan and Comeau with a 2-out single for the lead.

Western Texas came back with three in the second to grab a 4-1 lead. WNCC scored one in the second on an Emma Glawson solo home run and then retook the lead with two in the third on two hits. Comeau led off with a walk and scored on a Baesler single. Baesler came around to score on a Clark double for the 5-4 lead.

Western Texas came right back and tied the game at 5-5 with a run in the fourth. The lead stayed that way until the Westerners scored five in the sixth for the final runs.

WNCC outhit Western Texas 14-12. Hogan went 4-for-4 with a run scored. Clark also had three hits with a double and RBI. Baesler tallied two hits with three RBIs and a run scored.