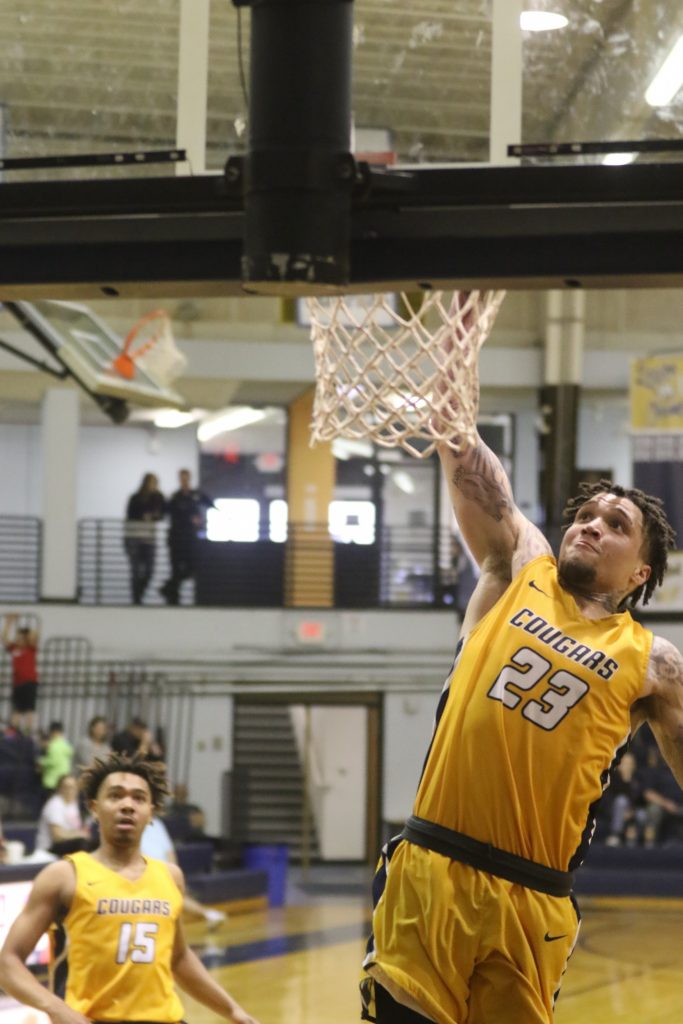 The Western Nebraska Community College men’s basketball team’s goal of reaching the NJCAA national tournament will continue on Thursday in the quarter-finals of the Region IX tournament.

The other quarterfinal contests Thursday at Northeastern Junior College, the site of the regional tournament, pits Otero against Gillette at 1 p.m., Western Wyoming Community College against McCook at 3 p.m.; and NJC taking on Central Wyoming College at 7 p.m.

Semifinals are slated for Friday at 5 and 7 p.m. while the championship game is scheduled for Saturday at 7 p.m. The winner of the Region IX tournament automatically qualifies for the national tournament March 16-21 in Hutchinson, Kansas.

WNCC sophomore Teddy Allen, who was named the Region IX South Player of the Year earlier this week, said the focus is on themselves and playing good defense.

“The focus of the team is to communicate on defense and making sure the ball touches three sides on offense,” Allen said.

For WNCC, they know they can beat anyone.

“Anything is possible. We know we can beat anyone, but you know, anyone can beat us, too, so we will just have to go out there and get it done.”

WNCC and Casper have met once this season when Casper came to Cougar Palace and earned an 88-86 win back on Nov. 19. The Cougars were scheduled to play in January, but that game was canceled because of snow.

WNCC and Casper enter Thursday’s contest as two teams that love to score. WNCC is averaging 92 points a game and averaging seven 3-pointers a contest.

Casper enters the contest averaging 97.6 points a game and averaging 10 3-pointers a contest.

Scoring will not be a problem for neither team. WNCC has plenty of offensive weapons and Allen said anyone can score for the Cougars.

‘We know we are a team that can score with anybody,” he said. “So we are just going to focus on this week on things we have to do on the defensive side of the ball to slow down Casper who is also a real good offensive team.”

Both teams come into the quarterfinal round after impressive opening round wins on Saturday. WNCC topped Trinidad State Junior College 90-82 in a game where the Cougars led from start to finish and only in jeopardy of losing the lead once when the Trojans came within two points.

Casper moved into the quarterfinals with a big 94-81 win over Laramie County Community College where they led 53-38 at halftime.

That 2001 team that won regionals won regional title, the schools 7th title, after an up and down year too. The players on the 2001 team included Pawel Mrozik, Derek Cummings, Deonte Moses, Barry Lindsey, Tomislav Topic, Justino Victoriano, and Terrance Allen.

So, anything is possible for this Cougar team.

“We definitely are capable of it,” Allen said. “I believe we all know that. It will just take a team effort. We have to play well and nobody can have no dub games. We have to come to play well.”

The Cougars feature the nation’s leading scorer in Allen, who is committed to the University of Nebraska. Allen is scoring at a 30.7 point clip. Allen has scored in double figures in every game he has played except one and that was an 8-point performance against North Platte on Feb. 4.

Allen has hit 30 or more points in 15 games this season. Allen has scored 798 points this season, which is the second most points scored in a season, passing Jervay Green, who scored 755 a year ago. The record is 1,033 points scored by Eric Gore in the 1989-90 season.

Allen, though, has not only been scoring, but also contributing in other factors on the court like rebounding and assists. Allen is averaging 3.6 assists a game, which leads the team, and is pulling down 7.2 rebounds, which also leads the team.

When he is not scoring, he is finding his teammates and there is plenty of offensive weapons on the team. Kenny Strawbridge is averaging 14.8 points a contest followed by Kalen Williams at 13.1, Jarred Rosser at 9.5, and Elie Cadet and Tayler Johnson each at eight points a game.

Casper matches up pretty even with the Cougars. The T-Birds have four players in double figures, led by David Walker at 21.5. The other three include Jalen Harris at 16.0, Philip Pepple at 12.1, and Isaiah Banks at 10.1.

A win on Tuesday against Casper, who won the Region IX title a year ago, would pit the Cougars against the winner of the NJC and Central Wyoming game on Friday.

Allen and the team want to bring a regional title back to the fans of Scottsbluff and it would be pretty special to do that.

“With everything we have been through this year, it would mean everything,” Allen said. “We are really coming together as a team. We don’t want it to be over. It would be a big thing if we were able to pull it out with seven players and all the ups and down, and to just get it done. It would be pretty special.”