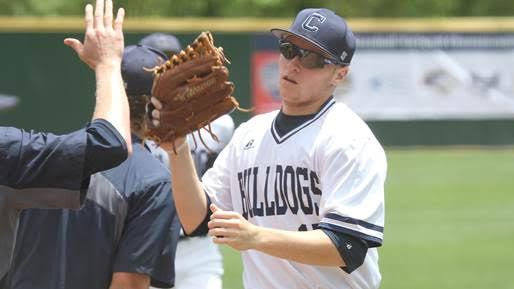 Wade Council trusted the process. When the Concordia University baseball program entered the picture in recruitment, the Colorado Springs, Colo., product bought into the vision for what the next four years could become. It may have been a program without a history of championships to sell, but Council saw through what had happened in the past.

A conversation Wade had with his father Russ seemed to confirm what he had already believed. Something special was about to happen at Concordia.

“I don’t think it’s surprising at all,” says Council of the recent rise of Bulldog baseball. “I remember when my dad and I were driving home from my (recruiting) visit. He looked at me and said, ‘(Ryan) Dupic is going to win a couple conference championships in your time here if you decide to come here.’ I kind of always had that thought coming in and that made my decision a lot easier knowing I’d be playing for a successful coach and someone who knows the way.”

Russ Council knew something. His son has been a key figure on two GPAC championship teams that have trailblazed the way to two national tournament appearances. The Bulldogs have made such progress that Perfect Game even included them in its NAIA preseason top 25 for 2020. Council will always be able to share a claim in writing a completely new chapter in Concordia baseball history.

During Council’s collegiate career, the Bulldogs have a combined record of 92-64 while Council has hit .311 with a .402 on-base percentage in 151 games. He’s collected 150 hits, 106 runs scored, 89 RBIs, 34 doubles and 10 home runs. And that’s about the extent of what the numbers can tell us about Council. It’s clear his impact goes beyond them. Council’s teammates look up to him.

“It’s tough to quantify,” said head coach Ryan Dupic, “He’s obviously a good player, but he’s just a great kid. He’s very steady and has a big heart the way he cares for teammates. He’s a guy that has earned a great degree of trust amongst his teammates. They trust him and he’s someone they go to. It’s hard to quantify. He’s a terrific kid. I’m just so thankful he’s been in our program. I’m looking forward to great things out of him. I think he’s going to have a big senior season.”

Council is a baseball player. Of course he is also concerned about academics – he’s an NAIA Scholar-Athlete too. But his college decision was always going to be somewhat of a baseball decision. He wanted to go somewhere that had a coach who believed in him.

Concordia fit that bill. The first connection came through former Bulldog Josh Prater, who was a senior at Pine Creek High School at the same time Council was a freshman. When Dupic learned more about Council, he was clearly intrigued. Even before Council showed up on campus, Dupic referred to the new left-handed hitter as “a winner.”

Recalls Council, “Basically how I found out about Concordia was Dupic called me and said, ‘Hey, I’ve seen you and I know your high school coach. He’s talked to me about you. We want you to play outfield.’ That was big for me because every other school just wanted me to pitch. I didn’t really want to pitch. Hearing Dupic say that I could play outfield was kind of the game-over decider in how I came here.”

It’s hard to imagine Council has had any regrets. Actually, euphoria is likely more the feeling Council felt on April 27 of last season when he and his teammates dogpiled near the pitcher’s mound in celebration of the Bulldogs’ second GPAC regular-season title in three years. Not only that, Council has found love at Concordia. Last summer, he got engaged to Taryn Schuette, who plays for the defending national champion Bulldog women’s basketball team (safe to say there are plenty of rings between the two of them).

At this point in his career, Council has reached a level of maturity that comes with experience. To be honest, Dupic never really had to spend any time worrying about Council, who has been counted upon as the team’s leadoff hitter and right fielder. He’s also being asked to lead this team and set an example for younger players. He and the other veterans of the squad seem to have a clear focus.

“It’s just to make sure the guys are all aligned on the same page,” Council said. “Before the season the senior class met and we decided what we wanted to set for our culture. The two main things were family and continuous improvement. My job is to make sure the younger guys understand what that means and showing them a positive example on how to do it.”

While Council prefers to hit and play outfield, he certainly is a capable pitcher. We’re still trying to figure out exactly what he can’t do. Even with what Council has accomplished so far, it’s clear he’s not satisfied or complacent. The sight of his GPAC championship rings serves as “an extra motivator to know that we can do it.”

There are certainly plenty of others to credit – those who altered the culture, reversed the fortunes of the program and made it one that commands respect. It never takes just one person. Some of the game changers have included the likes of Casey Berg, Nick Little, Christian Meza, Jason Munsch and so many others. Council is another of those building blocks that constructed a rock-solid foundation under Dupic’s leadership.

Perhaps the best is yet to come.

Says Council, “One goal we talked about was not only winning the GPAC outright, which is the main goal, but after that we really want to win the conference tournament and get that banner. That’s something we’ve never done before. Our third goal is to win the regional and make it to the World Series.”