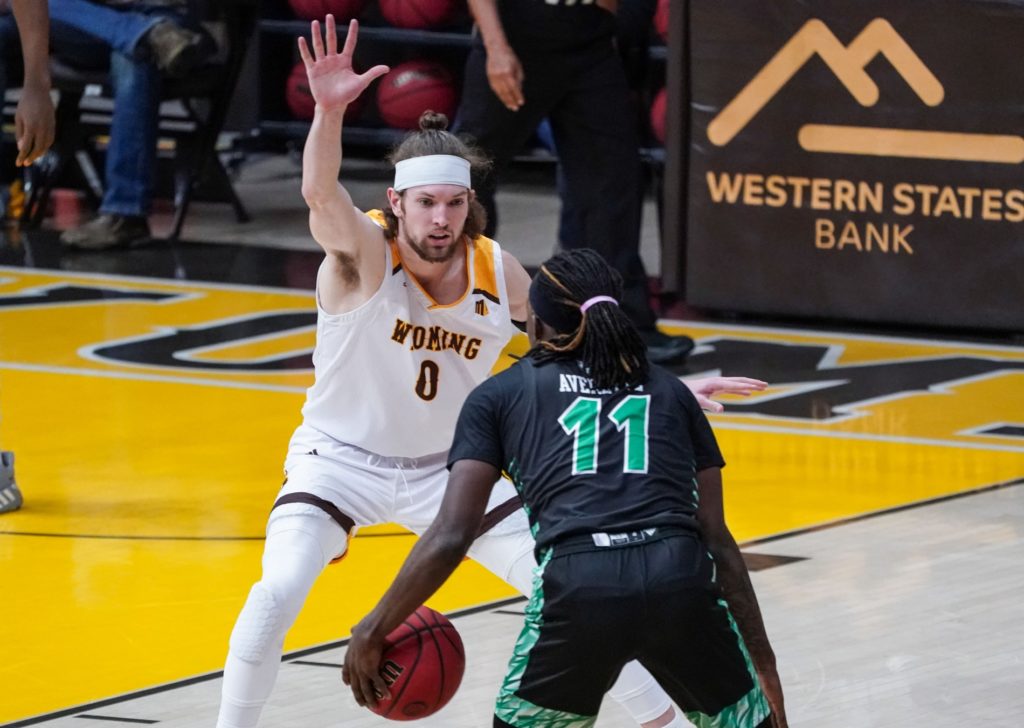 Laramie, Wyo. (Dec. 30, 2019)  — The New Year will begin for the Wyoming Cowboy Basketball team in Boise, Idaho, as the Cowboys return to Mountain West Conference play against the Boise State Broncos on New Year’s Day 2020.  The game will tip off at 6 p.m., Mountain Time on Wednesday, Jan. 1 from ExtraMile Arena on the Boise State campus.

The game will be broadcast on radio over the 26 affiliates of the Cowboy Sports Network with Dave Walsh (play-by-play) and Kevin McKinney (color analyst) describing the action.  The radio broadcast will begin with the pregame show at 5:30 p.m.  Wednesday’s game will also be streamed live on the Mountain West Network and can be found online at www.GoWyo.com.

A Look at the New Year’s Day Matchup

Wyoming will enter Wednesday’s game with a 5-9 overall record and an 0-2 Mountain West record this season.  The Cowboys are coming off two consecutive wins over Denver (72-66 in overtime on Dec.  21 at Denver) and Nebraska Wesleyan (82-68 on Dec. 28 in Laramie).

Boise State is 9-5 overall and 1-1 in conference play entering this week.  The Broncos have won their last three games this season.  After losing to Georgia Tech, 60-74 in the first round of the Diamond Head Classic in Honolulu, Boise State came back to defeat Portland (85-69) and UTEP (72-67) in its next two games in Hawai’i.  The Broncos also defeated Cal State Northridge (103-72) last Saturday in Boise.

The Cowboys and Broncos have played one common opponent thus far this season — the New Mexico Lobos.  Wyoming lost at home to the Lobos by a score of 65-79 on Dec. 7.  Boise State also lost to the Lobos, but on the road in Albuquerque by a score of 78-80 on Dec. 4.

Wednesday’s game will feature two of the Mountain West’s leading All-Conference candidates who also happen to be the league’s two leading scorers to date. Wyoming sophomore guard Hunter Maldonado currently ranks No. 2 in the Mountain West in scoring, averaging 17.9 points per game.  He trails only Boise State junior guard Derrick Alston, who currently is No. 1 in the MW in scoring, averaging 21.4 points per game.

Boise State has one other individual ranked in the Top 10 in the league in scoring in senior guard Justinian Jessup, who ranks No. 8 in the conference in scoring, averaging 15.2 points per game.  Jessup, who is from Longmont, Colo., is a former high school teammate of Wyoming Cowboy place-kicker Cooper Rothe, who also started for the Longmont High basketball team.

Other top performers for both teams include Cowboy senior guard Jake Hendricks, who is No. 2 in scoring for the Pokes averaging 9.0 points per game and is coming off his best two games of the season.  Hendricks scored a season high 21 points last Saturday vs. Nebraska Wesleyan and preceded that with 19 points in a road win at Denver on Dec. 21.  Hendricks also leads the Pokes and ranks No. 7 in the Mountain West in three-point field goals made (2.36 per game/33 total).  Boise State’s Jessup ranks No. 2 in the MW in threes made (3.07 per game/43 total), and the Broncos’ Alston ranks No. 3 (2.57 per game/36 total).

Wyoming sophomore forward Hunter Thompson is averaging 5.6 rebounds this season to rank No. 13 in the Mountain West and No. 2 for the Cowboys.  Joining Thompson and Maldonado (No. 13) among the league’s Top 20 rebounders is Boise State senior forward RJ Williams, who ranks No. 6 in the MW (8.21 rpg/115 total rebounds), and Alston, who is tied with Maldonado at No. 13.

Boise State has a dynamic new player who has been inserted into the starting lineup the past four games in junior forward Abu Kigab, who transferred from the University of Oregon to Boise State in January 2019.  Kigab just became eligible to play for the Broncos after sitting out the past year to satisfy NCAA transfer rules.  Kigab is originally from St. Catharines, Ontario, Canada.  Through his first four games for Boise State, Kigab has averaged 16.0 points and 6.0 rebounds per game.

Wyoming and Boise State will be playing for the 30th time in their series against one another.  The Broncos hold a one-game advantage in the series, 15-14, and have won the last three meetings.  Wyoming’s last win in the series came on Jan. 6, 2018, by a score of 79-78 in overtime in Laramie.

Following their game at Boise State on New Year’s Day, the Wyoming Cowboys will travel to Colorado State on Saturday, Jan. 4 for an 11 a.m.,M.T. game that will be broadcast on radio over the Cowboy Sports Network (CSN) and will also be televised live on AT&T SportsNet.  The CSN radio broadcast will begin at 10:30 a.m. Saturday morning.