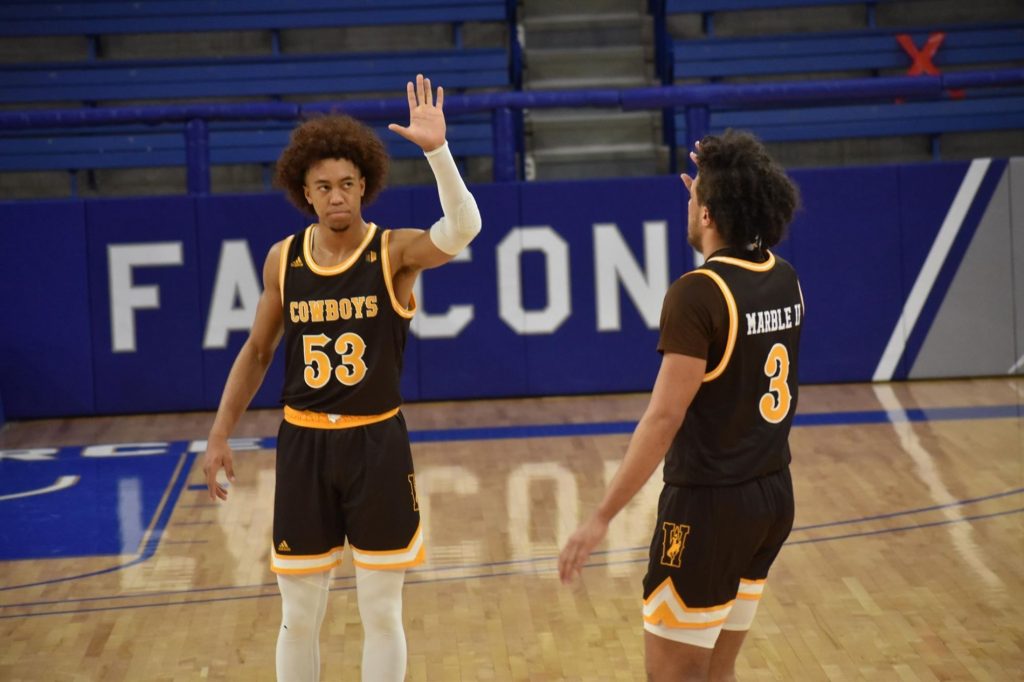 LARAMIE, Wyo. (Feb. 17, 2021) – The Wyoming Cowboys picked up a 83-74 overtime win over New Mexico on Wednesday evening inside Clune Arena in Colorado Springs. The Pokes had six players score in double-figures on the evening for the most in a contest this season. In what was a weird evening due to weather in the area, Wyoming’s arrival to the arena came 25 minutes prior to scheduled tip-off.

“It hasn’t been easy for us this season, but give it to our guys going through adversity tonight,” UW assistant coach Ken DeWeese said. “We got into rhythm later in the game and started to make shots and that made the difference tonight. It was a big win and for what we are trying to build, to be down and send it to overtime is tremendous. We fought through some things tonight.”

Wyoming hit 13 three pointers on the night for double-digit threes in eight of the last nine games. The Cowboys have hit 39 threes in three games inside Clune Arena this season. Wyoming shot 40 percent from the field, as the Lobos shot 44 percent.

After the Lobos took a 7-6 advantage, the Pokes went on a 9-0 run to take a 15-7 lead with 12 minutes left in the half. The Cowboys held the Lobos to 0-of-4 from the field during the stretch, as Jeffries, Maldonado and Graham Ike led the charge.

The Pokes would missed 10-straight field goal attempts, as the Lobos went on a 10-0 run to take a 17-15 lead with 6:54 left in the half. The streak was ended with a three pointer from Thompson the following trip down the floor.

The teams exchanged the lead in the final minutes. Wyoming head coach Jeff Linder was ejected after a technical and the Lobos added free throws but the Pokes added a three pointer by Thompson and a layup by Jeffries to take a 33-29 lead into the half.

The Lobos opened the second half hitting their first three field goals to tie the contest at 37-37 in the opening minutes of the half. New Mexico hit four-straight field goals and took a 45-39 lead on the Pokes with 12:48 left in the contest.

Wyoming went without a field goal for nearly four minutes, as New Mexico built a 49-42 lead with 11:48 left in the game. The streak was halted by Thompson, as he reached double figures with a layup. Wyoming would go on a 5-0 run with a three-pointer from Williams and dunk from Jeffries for a two point game at 51-49 in favor of the Lobos with 9:54 left.

The Cowboys took the lead at 54-53 on a layup from DuSell with 8:50 remaining, but the Lobos regained the lead with an 8-0 run for a 61-54 advantage with seven minutes left. Wyoming would with a 12-4 run to take a 66-65 lead on a banked three-pointer from Williams.

New Mexico would regain the lead, but DuSell added a triple from the wing to give Wyoming a 69-68 lead with 1:34 left in the game. Marble II added a pair of free throws for a 71-68 lead with 48 seconds remaining. But Javonte Johnson hit a three pointer to tie the contest at 71-71 with 28 seconds left on the clock, which sent the game to overtime.

Wyoming opened the overtime on a 5-0 run thanks to a pair of free throws from Williams and a triple from Thompson for a 76-71 lead. The Pokes would push the lead to 81-73 with 1:11 remaining and never looked back taking the game 83-74. Wyoming allowed only one basket in overtime

New Mexico was led by Makauch Maluach with 17 points and 12 rebounds.

Wyoming and the Lobos will wrap up their season series on Friday in Colorado Springs with a 7 p.m. start in a contest on CBS Sports Network.