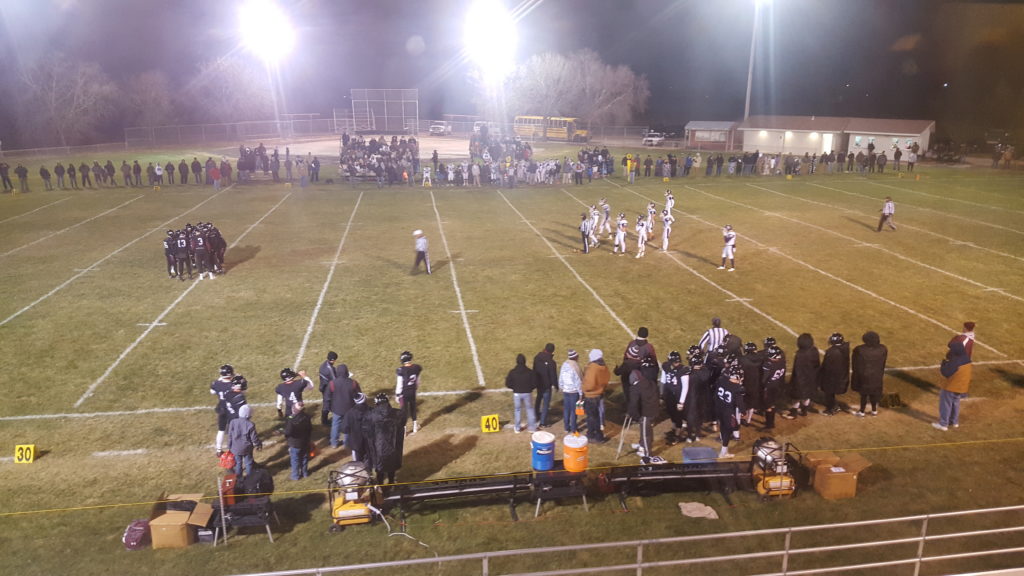 KTMX/KAWL Photo
The Cross County Cougars punched their ticket to the State Class D-1 football quarterfinals, with a 20-6 upset win over previously unbeaten Bruning-Davenport-Shickley Wednesday night in Bruning. The surging Cougars have won five of their last six games, after beginning the season with losses in three of their first four games.
BDS got the scoring started on their second possession when Jr. quarterback Dominic Quinones found Sr. receiver Isaac Else all alone for a 23-yard touchdown pass with 3:29 to go in the first period, to go up 6-0. But that would be the only BDS score of the game.
On the ensuing possession, Cross County engineered a 5-play, 69-yard drive, capped off by a 46-yard touchdown run by sophomore running back Carter Seim. Sr. fullback Landen Berck punched in the two-point conversion, and the Cougars led 8-6 early in the second quarter.
In the second half, it was big-play time again, as Jr. running back, Isaac Noyd exploded for a 60 yard TD scamper late in the third quarter to put the Cougars up 14-6.
One series later, BDS forced a Cross County punt, which Cael Lundstrom shanked, giving BDS a great opportunity starting at the CC 34-yard line. But the Cougar defense stiffened, and the Eagles lost the ball on downs. On the next series, the Cougars salted the game away when Seim toted the pigskin 43 yards for an insurance score with 5:41 to go in the game.
BDS finishes the season at 9-1, while Cross County, now 6-4, moves on to the quarterfinals Tuesday, November 12, where they will face Tri-County, a 68-8 upset winner over Elmwood -Murdock.   Cross County vs Tri-County can be heard on Tuesday at 6:00 P.M. on KOOL Radio 103.5 FM and 1370 AM.
© 2020 Nebraska Rural Radio Association. All rights reserved. Republishing, rebroadcasting, rewriting, redistributing prohibited. Copyright Information
Share: