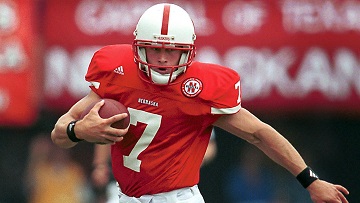 The Nebraska football team finished with a 55-9 record in Crouch’s five seasons on campus from 1997 to 2001. He was a redshirt freshman on the Huskers’ undefeated 1997 national championship team, and he led Nebraska back to the national championship game as a senior in 2001. Crouch was the 2001 Heisman Trophy winner and a two-time Big 12 Offensive Player of the Year (1999 and 2001). One of the greatest option quarterbacks in the history of college football, Crouch was selected for induction into the College Football Hall of Fame in March of 2020.

An Omaha native, Crouch passed for nearly 5,000 yards and rushed for more than 3,700 yards in his career. Crouch was just the third player in NCAA history to pass for 4,000 yards and rush for 3,000 yards. Including bowl games, Crouch accounted for 97 touchdowns in his career, throwing for 34 touchdowns, rushing for 61 scores and catching a pair of touchdown passes. He ended his career with the most rushing touchdowns and most 100-yard rushing games by any quarterback in NCAA history. In addition to his NCAA records, Crouch held 32 Nebraska records at the conclusion of his career. The only quarterback in Husker history to rush for 3,000 yards, Crouch still owns Nebraska all-time records for rushing touchdowns and total touchdowns.