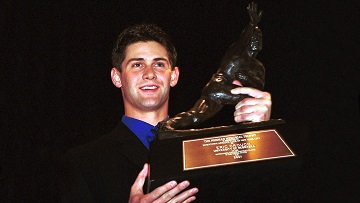 Heisman Trophy winner and Nebraska great Eric Crouch is one of 19 individuals who will make up the 2020 College Football Hall of Fame Class. The 17 players and two coaches were announced Wednesday by the National Football Foundation and the College Hall of Fame.

The 2020 Hall of Fame class includes five winners of major college awards, led by Crouch’s 2001 Heisman, and 10 conference players of the year, including Crouch, a two-time Big 12 Player of the Year.

Crouch is among the group of players selected from the national ballot that included 76 All-Americans. Crouch becomes the 19th Nebraska player to earn induction into the College Hall of Fame and gives NU 25 overall members of the Hall including six coaches. Crouch is the first Husker selected since Aaron Taylor was inducted in 2018. Crouch is the seventh Husker inducted into the Hall in the past 14 seasons joining Taylor (2018), Trev Alberts (2015), Tommie Frazier (2013), Will Shields (2011), Grant Wistrom (2009) and Mike Rozier (2006).

Crouch finished his college career as only the third quarterback in NCAA history to rush for 3,000 yards and pass for 4,000 yards. A 2001 first-team All-American, Crouch won the Heisman Trophy, Walter Camp Player of the Year and the Davey O’Brien Award. He guided Nebraska to an 11-2 record and a spot in the BCS National Championship Game at the Rose Bowl. In his senior season, Crouch became just the 13th quarterback in NCAA history to rush and pass for 1,000 yards in the same season.

One of five team captains as a senior, Crouch had his No. 7 jersey retired in 2002. Crouch was drafted as a receiver in the third round of the NFL Draft by the St. Louis Rams. He went on to play professionally in NFL Europe and the Canadian Football League. Crouch is the Owner & CEO of Crouch Recreation, a playground and recreation equipment vendor in Omaha.

Comments on Crouch’s Hall of Fame Selection:
Frank Solich, Nebraska Head Coach (1998-2003), Ohio Head Coach (2005-present):
“Eric Crouch had a special talent and is one of the most unique athletes I have coached in my career. His 2001 season was remarkable as he broke numerous NCAA and school records on his way to winning the Heisman Trophy. His outstanding leadership helped guide our team to the National Championship Game at the Rose Bowl as a senior.  Eric is a special young man and very deserving of this prestigious honor. He has represented Nebraska at the highest level both on and off the field.”

Tom Osborne, Nebraska Head Coach (1973-97), 1998 College Football Hall of Fame Inductee:
“Eric was a great runner and had excellent speed to go with his other skills. The thing that really struck me about Eric is that he was so much stronger than you would have thought. When I was recruiting him in high school and watched him in the weight room, it struck me that he was lifting amounts of weight that would have made an offensive lineman proud. He was really gifted and his skills fit Nebraska very well. I didn’t get to coach him, but enjoyed watching his career.”

Scott Frost, Nebraska Head Coach, Teammate of Eric Crouch in 1997:
“It is a well-deserved honor for Eric to be selected into the College Football Hall of Fame. He is one of the all-time greats in the proud history of Nebraska football and one of the best option quarterbacks in college football history. It is great to see a former Husker teammate selected for the Hall of Fame.”

Matt Davison, Crouch’s Teammate from 1997-2000 and NU’s Leading Receiver in 1998-99-2000:
“Eric was incredibly talented, but he had an even greater desire to win. He was one of the toughest players I was ever around, left everything on the field each Saturday and wouldn’t accept losing. Eric was a high character guy, a great leader and as good of a teammate as you could find. As a friend, I couldn’t be happier for Eric and his family.”

Turner Gill, Crouch’s Quarterback Coach at Nebraska, Nebraska Quarterback (1980-83):
“Eric was extremely explosive, very durable and was the fastest player that I have ever seen in college football. While his nature was to be quiet, he was a fierce competitor once he was on the field. An outstanding family man, Eric has always been very generous with his time in the community and is especially good working with youth, and he has continued that work in his career after football.”