AMES, Iowa – Iowa State continued its recruiting success in Wisconsin Wednesday with the signing of Racine’s Tyrese Hunter to a national letter of intent.

Hunter, a 6-1 guard out of Racine St. Catherine’s, is a consensus four-star recruit and a top-10 point guard that saw his rankings explode after an impressive summer. Hunter, who boasts supreme athleticism and toughness, topped out at No. 43 by Rivals, while ranking No. 56 by 247sports and No. 62 by ESPN. He is ranked No. 50 in the 247sports composite rankings and is the fourth-highest ranked recruit in ISU history during the internet rankings era.

“We are excited to sign Tyrese,” Iowa State head coach Steve Prohm said. “He is a guy that we connected with right away this past spring. Tyrese is just a great fit for our program because of his personality and character. He can really play. He brings great athleticism and toughness. He has an alpha dog approach to him. He is just going to continue to get better and better.

He earned Metro Classic Player of the Year honors while leading St. Catherine’s to a 25-0 record before COVID-19 ended the season on March 12. He scored 41 points, connecting on nine 3-pointers, and pulled down eight rebounds against rival Dominican, clinching the Metro Classic championship.

Hunter played his AAU ball for Phenom U. 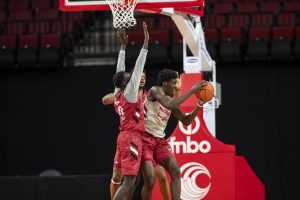