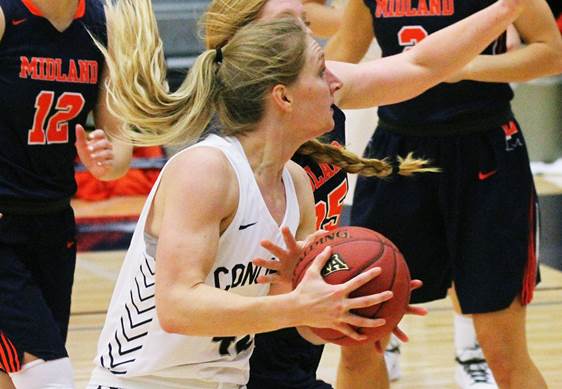 SEWARD, Neb. – We have seen this movie before and we’ll likely see it again this season. The trio of Grace Barry, Colby Duvel and Philly Lammers dominated the first 20 minutes while the top-ranked Concordia University women’s basketball team turned up the pressure on visiting Midland. The Bulldogs forced 37 turnovers and won going away, 93-70, in the GPAC opener on Tuesday (Nov. 12).

The layoff of nine days without a game did little to slow 14th-year head coach Drew Olson’s squad. Concordia is now 5-0 with four of the victories coming in blowout fashion.

“I thought we started really well. That was a good sign that we came with that kind of focus and really took it to them early on and got a big lead,” Olson said. “I felt like we needed to sustain that a little bit better and maybe that is the rust. I just think we’ve got to be better for a full game.”

If these Bulldogs can turn a game into a track meet, then it’s going to be a long 40 minutes of pain for the opposition. Duvel and company jumped the passing lanes while forcing a flurry of Warrior turnovers. Blink and you missed Concordia jetting out to a 16-2 lead. Midland head coach Shawn Gilbert seemed to sense the onslaught, calling timeout just 1:11 into the contest.

The Warriors had no answer for Lammers inside – or for her ability off the dribble. At one point in the second quarter. Barry flipped the ball behind her back at the top of the key to Lammers, who blew to the basket for two. Lammers took advantage of her 22 minutes and topped all players in both scoring (26) and rebounding (nine) while swiping four steals.

“A lot of that strength comes from knowing our roles on the team,” Lammers said. “We know what each other’s great at and play to that and put each other in position to succeed. There’s also a lot of talk going on between coaches and players. We’re continuously talking to each other on and off the court.”

There was plenty of fun had by Barry, who is an absolute pest while pressing in the backcourt. She pulls the strings for an offense that shot 48.1 percent (39-for-81) from the floor. Barry booked 18 points, nine assists and four steals. Duvel added 10 points, six rebounds and five steals as she continues to become more adept at finishing around the basket.

The Bulldogs led by as many as 32 points while shell-shocking a familiar opponent. Even veteran Amanda Hansen had a tough night. She went 2-for-12 from the floor and committed seven turnovers. Concordia is simply that good at what it does. Even when the opposition has idea of what it will face, the Bulldogs still dominate.

“I think we do a great job of pressuring the ball,” Olson said. “Once we have that second line knowing what they need to do and taking things away it becomes even more effective as the game goes on.”

GPAC play will continue on Saturday when the Bulldogs will host Briar Cliff (1-3, 0-0 GPAC) at 2 p.m. CT. Concordia has won each of the last six meetings in the series with the Chargers, who will wait until Saturday for their first conference game of the 2019-20 season.