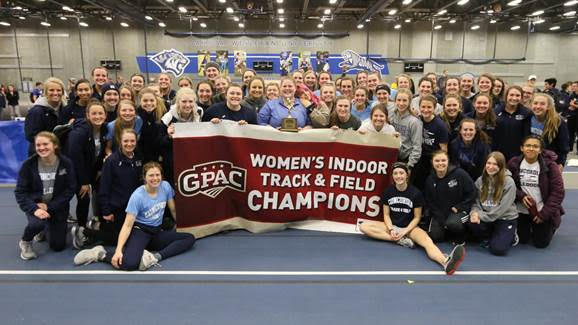 MITCHELL, S.D. – When it comes to track and field and cross country, Concordia University has become a dominant program on the women’s side. With the help of seven conference event titles, the Bulldog women reigned supreme at the 2020 GPAC Indoor Track & Field Championship. The meet played out Friday and Saturday (Feb. 21-22) at the Avera Sports and Wellness Complex in Mitchell, S.D. Concordia sophomore Rachel Battershell earned GPAC Women’s Outstanding Athlete of the Meet honors.

“I really believe in synergy and that comes from team togetherness,” Beisel said. “We told our athletes that they are not defined by their seed marks. We’ve got athletes who do not want to let their teammates down. Our staff has been working to build robust depth in all event areas. We’ve gotten to a point where one of our athletes can have a bad day and we have others who will step up and make up those points. That’s what you see with our women.

“Our guys had some big performances and were able to hold off Hastings to get third. I always want more and they do too, but we’re not unhappy with that finish.”

Going back to last winter, Concordia has won women’s GPAC titles for 2019 indoor/outdoor, 2019 women’s cross country and now 2020 indoor. As a second-year collegiate athlete, Battershell seems to only be getting started. She put up 20 points in individual events by taking first place in the 60 meter hurdles and 400 meter run. Battershell was cooking in the hurdles to the tune of an 8.81-second finish.

She wasn’t quite done. Battershell also ran the anchor leg for a conference champion 4×400 meter relay that broke the GPAC indoor record with a time of 3:56.28. She was joined in the race by teammates in sophomores Jacee Pfeifer and Sarah Lewis and junior Kennedy Mogul.

Said Beisel of Battershell, “She’s the first person to give glory to God. The first thing she thinks about when she finishes a race is God. She gets a lot of strength from that. She’s a gamer and she competes.”

Puelz is already proving to be a big-time athlete after an acclaimed high school career at Lincoln Lutheran. With her win on Saturday, the Bulldog women’s pole vault crew is responsible for nine titles over the last 12 GPAC championship meets. Allie Brooks also tied for second in the pole vault, meaning Concordia earned 17 team points in the event.

On the men’s side, senior Jacob Cornelio won the GPAC weight throw competition for the second year in a row. His winning toss measured in at 64’ 6.” Cornelio remains the NAIA national leader in the event. In terms of fruitful event groupings for the men, the pole vault stood out with Chase Berry and Gavin DeHaai sharing second place and Tucker Platt taking fourth (19 combined team points). Junior Jordan Lorenz also broke through with a PR and a runner-up finish in the 5,000 meters (15:24.35).

Like Berry, Colton Meyer is another freshman male to keep an eye on. He placed fourth in the 60 meter hurdles, an event he’s qualified for nationals in. Meyer joined a 4×4 that placed third (teammates were Xavier Ross, Camden Miller and Henry Reimer). Another significant finish on the men’s side was the fourth-place slotting for Jerod Peters in the shot put.

The women had jumped out to a nice start on Friday with Mogul and Emily Loy going 1-2 in the pentathlon. In the 60 meter hurdles, not only did Battershell win it, Lewis placed fourth, Mogul fifth and Loy seventh (21 combined team points). Pfeifer (third) and Lewis (fifth) added points in the 400 meters. In the mile, Heritage (third), Rebekah Hinrichs (fifth) and Alyssa Fye (sixth) teamed up for 13 points.

Another individual worth noting is sophomore Cora Olson, who placed third in the 60 meter dash, fourth in the long jump and sixth in the triple jump. Olson is one of the leaders of a deep women’s group of jumpers who had three all-conference claims in both the long jump and triple jump. Along with Shaw’s title in the weight throw, Morgan De Jong (fourth) and Olivia Buschow (seventh) also scored in the event.

Said Beisel afterwards, “It’s humbling. It takes a whole group, collective effort. We’re blessed to have the staff we have, the athletes that God placed here and a supportive administration. It’s awe inspiring and humbling that God has brought us all together at this place in time.”

For qualifying athletes, the indoor season will continue at the 2020 NAIA Indoor Track & Field National Championships in Brookings, S.D., March 5-7. All qualifiers are scheduled to be announced by the NAIA by Feb. 26.