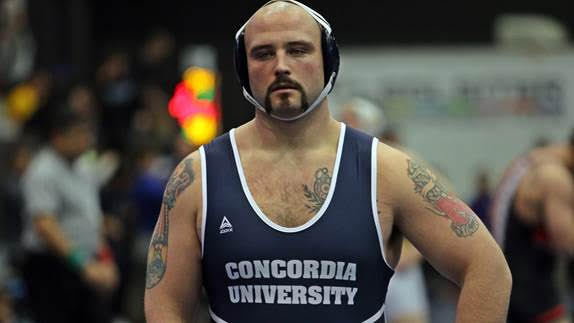 At this point, if you were interested in the circumstances that led to Tanner Farmer becoming a member of the Concordia University wrestling program, then you already know. Many news outlets (especially in Lincoln and Omaha) have covered the former Nebraska Cornhusker offensive lineman’s pursuit of his NFL dreams and the coaching aspirations that put him in connection with Concordia in the first place.

Media requests have bene plentiful in regards to chasing down one of the more compelling collegiate wrestling stories (at any level) of the season. A range of reporters have chronicled Farmer’s first match as a Bulldog, his work during practices and closely monitored his advancement at the NAIA National Championships.

When the cameras were not rolling, Farmer could honestly say, this was never about the attention, but if that attention benefited Concordia then he was happy to oblige. Said Farmer at the conclusion of the national tournament, “It’s an honor to be able to be part of the Concordia wrestling program. For everything the athletic program in general – the football program and the wrestling program – has done for me, I can’t thank them enough. It means the world to me and I’m so grateful I’ve had this opportunity.”

What’s striking about Farmer is humility and his honesty. When he tells you that he gets more nervous for any wrestling match than he did when he played in front of college football crowds in excess of 70,000 fans, you believe him. He could certainly feel the jitters on Jan. 9 when he wrestled for the first time at Concordia. He barely won, 3-2, despite his pedigree as a high caliber NCAA Division I athlete.

Two short months later, Farmer made his way to the NAIA heavyweight national championship match. There he stood one victory away from his goal of becoming a champion. With sheer strength and determination, Farmer sometimes out-willed his foes. The action-packed sequence that led into Farmer’s pin in the national semifinals raised eyebrows. Unfortunately, not everything in life comes with a fairytale ending. Farmer lost in sudden victory in the finals.

The dejection was obvious in Farmer and in head coach Levi Calhoun. Some perspective is needed. Three months earlier, no one had any inkling that a former Husker football player would be wearing a Bulldog singlet in a national championship match.

“It’s been incredible,” Calhoun said. “He’s made such an impact on our program with the person he is and the work that he put in. I’m forever grateful for what he’s done for our program. Obviously he didn’t meet the goal of being a national champ, but he has nothing to hang his head about. Anyone who watched that match saw that he left it all out there. That’s all I could ever ask for from him.”

There’s something larger-than-life about Farmer that goes beyond his physical size. When he speaks, people listen. Some Husker fans will recall his video interview from 2018 that was viewed more than two million times on Twitter. In that press appearance, he compelled his teammates to buy in. Farmer’s charisma wasn’t lost on the Concordia football players, who were some of his biggest fans – and they made it known on social media. As a volunteer this past fall on Coach Patrick Daberkow’s staff, Farmer displayed many of his natural leadership qualities.

When Andy Hamilton of Track Wrestling caught up with Farmer at the national tournament, he referred to Farmer as “maybe the most interesting story in NAIA wrestling this season.” Farmer carried a 26-0 record into the national title match despite having almost no wrestling experience at the college level. He was named the GPAC Wrestler of the Year and helped Concordia win GPAC regular season and postseason championships during a storybook season.

Every time out, the juices were flowing for Farmer. As he told Hamilton, “I get nervous, my stomach gets upset … I don’t know what it is about wrestling – it’s just a special sport. For me it holds a special place in my heart and it really gets to me. It gets me so nervous.”

In most other situations, Farmer appears at ease. He takes on every media request with a positive attitude. He answers every question that comes his way. Sometimes they are similar to ones he’s already been asked. How did this possibly come about and why wrestle at Concordia?

That’s easy, Farmer loves competition. He’s quickly become a fan favorite at Concordia. It seems he’ll also carry with him a soft spot in his heart for what it means to be a Bulldog.

Said Farmer after his very first wrestling match, “As a volunteer coach that was a great experience. I really got to know a lot of the staff and a lot of the coaches. They’re all just great people. This is just an amazing university, amazing staff. To be able to be a part of this I felt like I found my calling in coaching.”

In his short time as a Concordia athlete, Farmer produced something that will never be forgotten, even if he did come up just a bit short of the ultimate goal. What he achieved was about more than winning wrestling matches. Says Farmer, “I still have a lot left on the table. If I was able to dedicate two years to wrestling (instead of a couple months) who knows where I’d be. I’ve learned a lot about great people at Concordia. There are so many wonderful people there that have touched my life. I’m just so grateful.”