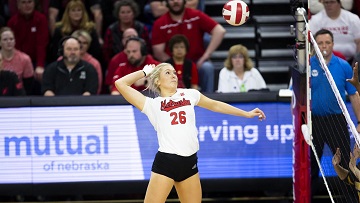 Stivrins was a unanimous choice for the All-Big Ten First Team. The 2018 AVCA First-Team All-American collected her second career all-conference honor after 2.57 kills per set, 1.06 blocks per set and a team-best .383 hitting percentage during the regular season. Stivrins’ .412 hitting percentage in conference play was third-best in the Big Ten, and the junior middle blocker guided a Husker defense that had a league-best .156 opponent hitting percentage in Big Ten play.

Sun earned her first career All-Big Ten honor, but her second career all-conference honor as she was an All-Big 12 first teamer at Texas in 2017. The junior outside hitter led the Huskers with 3.57 kills per set with 2.42 digs per set and a team-high 24 aces during the regular season. Sun posted double-digit kills in 18 of 20 Big Ten matches, and her 3.53 kills per set in Big Ten play ranked eighth.

Hames collected her first All-Big Ten award after averaging 10.92 assists and 2.90 digs per set during the regular season. One of the best defensive setters in the nation, Hames recorded a team-high 15 double-doubles and also served 21 aces. Her 11.37 assists per set in Big Ten play ranked third in the conference.

Kubik earned Nebraska’s first Big Ten Freshman of the Year honor and first conference freshman of the year since Hannah Werth won the award in 2009 in the Big 12. Kubik averaged 2.73 kills and 2.52 digs per set in her first year as a Husker. She ranked fourth among Big Ten freshmen in kills (2.73 per set) and digs (2.52 per set) in conference play. The outside hitter was also named to the All-Big Ten Second Team and the All-Freshman Team. Kubik is the first Husker freshman to be named to an All-Big Ten team since Kadie Rolfzen in 2013.

Knuckles earned All-Freshman Team accolades after leading the Huskers with 3.71 digs per set in her first year as the Huskers’ libero. Knuckles served 20 aces and was a Big Ten Freshman of the Week and Big Ten Co-Defensive Player of the Week during the season, helping the Huskers lead all Big Ten teams with a .156 opponent hitting percentage in conference play.