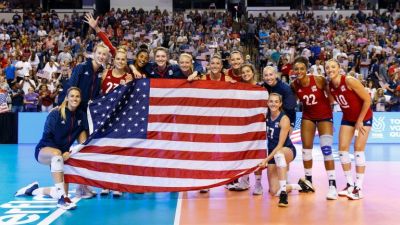 The U.S. Women’s National Volleyball Team, with the help of two former Husker greats, defeated Argentina 25-22, 25-17, 25-23 on Sunday in Bossier City, Louisiana, to go undefeated in the Tokyo Women’s Volleyball Qualification Tournament Pool C and secure its berth into the 2020 Tokyo Games. Team USA, ranked third in the world, defeated No. 23 Kazakhstan in straight sets on Friday and came from behind to down No. 16 Bulgaria in five thrilling sets on Saturday before Sunday’s win over No. 11 Argentina.

The U.S. is the only country to reach the podium in women’s indoor volleyball in each of the last three Olympic Games. Former Huskers Jordan Larson and Kelsey Robinson played big roles for the U.S. throughout the week. On Sunday, Larson had 12 kills on 24 attacks in the victory. She also provided 17 receptions and a 59 positive reception percent. Robinson added 10 kills on 23 attacks, with two aces and one block for 13 points. Both were members of the 2016 U.S. squad that earned the bronze medal in Rio de Janeiro, Brazil, along with current Husker assistant coach Kayla Banwarth.

The top 24 ranked teams, minus 2020 Olympic Games host Japan, are placed into the six pools using the serpentine system with pool winners claiming berths into the 2020 Olympics along with host Japan. The final five spots into the 2020 Olympics will be determined in early January through the five confederation zonal championships. Team USA, the only country to medal in women’s indoor volleyball in each of the last three Olympic Games, seeks its 12th appearance in the Olympics. In its previous 11 Olympic Games, the Americans claimed silver medals in 1984, 2008 and 2012 along with bronze medals in 1992 and 2016.

(Audio) Coaches clinic set for this month in Lincoln

NJCAA moves most fall sports to spring, basketball to start in January

Morikawa clutch in finish and playoff to win Workday Open