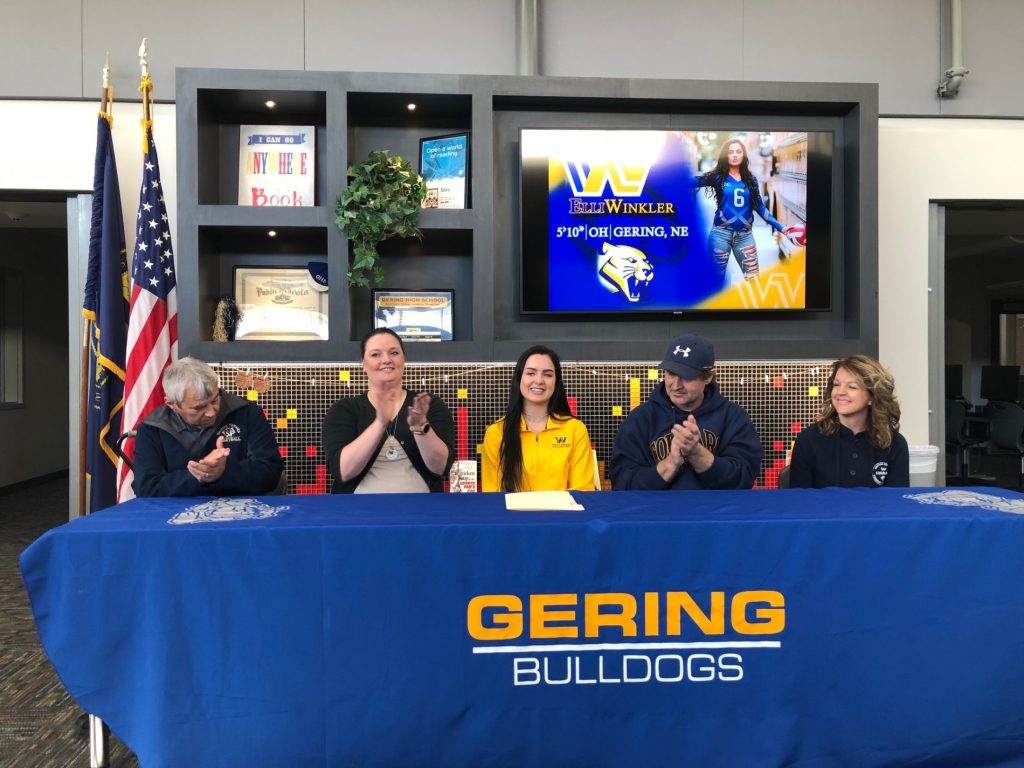 Gering’s Elli Winkler had a decision to make of what she wanted to do in college.

On one hand was volleyball, the other hand was track and field. And, on the third hand, was the dance team.

After visiting Western Nebraska Community College and reuniting with her former teammates Olivia Schaub and Arianna Mitchell, along with the rest of the players, her decision became much clearer. She made that decision to play volleyball for WNCC official when she signed her letter of intent on Thursday in front of family and friends at GHS.

“I really wasn’t sure about it at first, but Binny [Canales] invited me on campus and I got to take a tour with all the girls and practice and I think that really helped me decide,” Winkler said. “Practice felt comfortable and it felt like my team.”

That decision to take volleyball became a reality after weighing all the options.

“It was pretty tough honestly. I had a couple offers for track and volleyball, and dance team. I ruled those out one by one visiting places and then deciding that WNCC was best for me and volleyball was going to be best for me.”

Winkler will join a WNCC team that will have plenty of players that she played with and against. She will be joining her former teammates Schaub and Mitchell, who will be sophomores at WNCC next year. She also will be play alongside Mitchell’s Anabelle Gillen as well as current Cougar recruit Hyleigh Fornstrom.

Fronstrom is Winkler’s volleyball club teammate right now as part of the Panhandle 18s junior team, which is part of the NEVBC Club. Other members of the Panhandle club, who have a 14-2 record and ranked No. 1 after this weekend in Colorado, include her Gering teammates Macey Boggs and Zoee Smith; Sidney’s Mattie Johnson; Chadron’s Allie Ferguson and Anika Burke; Leyton’s Madeline Watchhorn; and Pine Bluff’s Sophie Howard.

Winkler said it will be fun to reunite with her former Bulldogs.

“It is great to be able to play with people that are familiar to me and I played with before. I am really excited to be teammates again,” she said. “It will be great [to team up with Olivia and Arianna] again] because we already have bond from previous years so it will be good to reconnect and connect on the court again.”

At Gering, Winkler made a drastic improvement her senior year. As a sophomore, Winkler hit minus .333 in 11 sets on varsity. As a senior, Winkler pounded down 417 kills at 4.1 per set. She also had an 83.3 serving accuracy with 30 aces, and finished with 76 blocks and 220 digs.

Winkler had two matches last fall where she tallied over 20 kills. She had 21 kills in a season-opening win over Alliance and then pounded home 22 kills in a sweep over Scottsbluff. She had 22 matches where she had double figure kills.

Winkler said she still needs to get better.

“I would say all areas [I need to get better in],” she said. “I need to improve on hitting, serving, and definitely passing is one I can work on.”

Gering coach Amanda Cochran said Winkler was a key hitter on the front line for the Bulldogs.

“I think Elli is an awesome player,” Cochran said. “You have an arm of steel, girl [looking over at Elli]. She can bomb away on that outside so I am excited to see what she can do and where she fits in. I am really excited that she will be at WNCC with two big sisters from our past team.”

Winkler, who also participates in track and field and is a member of the Poms Dance team, said playing college volleyball is a great opportunity.

“It is a great opportunity,” she said. “I never really saw myself going on, but I am glad I got this opportunity to continue playing.”

When she graduates from Gering, she will have many memories to cherish on the volleyball court as well as around the school.

“It was great [being a part of Gering volleyball] and I wouldn’t trade it for the world,” she said. “This season we had a great team and it has always been great. I love my teammates and it is more like a family to me. It was great.

“It will be tough walking out these doors and not see the familiar faces again, but I am staying in the community so I will still see all these people still. It won’t be too bad; it is not like I am going someplace far away.”

Winkler is undecided on a major as of now, but is leaning towards environmental science or criminal justice.