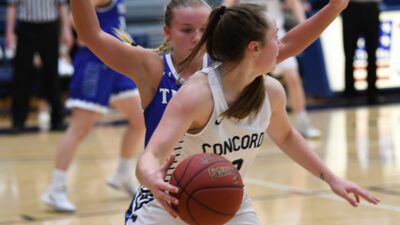 SEWARD, Neb. – Put this one under the category of a gritty, no frills type of performance. It’s all about surviving and advancing this time of year. While hosting a GPAC tournament quarterfinal clash, the 17th-ranked Concordia University Women’s Basketball team held visiting Dakota Wesleyan to 31.0 percent shooting in a 70-58 victory on Wednesday (Feb. 24). The Bulldogs overcame some of their own shooting struggles by going 18-for-25 from the foul line.

“I’m just really proud of our team and the fight that we have,” Olson said. “Dakota Wesleyan’s really good. They’re a great defensive team with a lot of really good pieces. They gave us a great battle, but we were able to make enough plays. Our freshmen really came through today. You had Sadie Powell with the big spurt in the first half and Bailey Conrad was great all game. Taysha (Rushton) came up big in the second half. I’m just really proud of all of them.”

This one definitely wasn’t easy, despite it appearing in the second quarter that Concordia just might blow it wide open. The Tigers (14-11) kept on coming. A key sequence came in the final minute when an intentional foul was called and resulted in a three-point possession for the Bulldogs, who increased their lead from five to eight points (66-58). A steal by Rushton on the ensuing play essentially sealed the game up. Four more free throws put the finishing touches on another win inside Friedrich Arena.

Defensive tenacity and ball security were key factors for Concordia, which ended up plus-nine in turnover margin. The Tigers opened the game a miserable 1-for-13 from the field. Powell got loose in the second quarter when she scored eight points in a row for the Bulldogs. Fellow freshman Kendal Brigham drained a triple in the corner that made it a 32-16 Concordia lead late in the first half.

“It’s a lot of fun working with my teammates,” Powell said. “They feed me when I’m open. We work really well together. If I’m the one who gets to score then that’s great. If it’s not me that’s great too. It’s just fun when we can all jell together really well.”

DWU grinded its way back into the contest and got within two (57-55) on Matti Reiner’s jumper with less than five minutes remaining. The Bulldogs responded with a critical 6-0 run that included two Taylor Cockerill free throws and a bucket apiece from Rylee Pauli and Taysha Rushton. After Reiner’s basket, the Tigers managed just one field goal the rest of the way as Concordia locked in.

Rushton led all players with 19 points while going 8-for-10 from the foul line. Pauli put together a fine night that included 16 points, seven rebounds and three steals while Powell posted 10 points and three rebounds. Conrad notched nine points, six assists and four rebounds and showcased a pretty drive to the basket just before the half. Mackenzie Koepke grabbed a team high 10 rebounds.

Dakota Wesleyan gave Concordia all it could handle in all three meetings this season (including a Tiger win at the Corn Palace). Reiner (13 points and 10 rebounds) and Jada Campbell (12 points and 12 rebounds) both turned in double-doubles on Wednesday. Leading scorer Haidyn Pitsch was held to three points on 1-for-10 shooting.

Another stiff challenge awaits the Bulldogs, who will host third-seeded Northwestern (17-9) in the GPAC semifinals on Saturday (tipoff at 3 p.m. CT). The Red Raiders have won 12 of their last 13 games after 76-54 quarterfinal victory over Midland. Concordia swept the regular season series with Head Coach Chris Yaw’s squad.

“We have to refocus,” Olson said. “We talk about how we win, we lose, we go home. You come back the next day ready to work. Whether you had a good game or a bad game, be ready for the next one. Northwestern’s another great team. We’ve been fortunate to beat them twice, but they’re really good and really balanced. We have to be ready to go.”