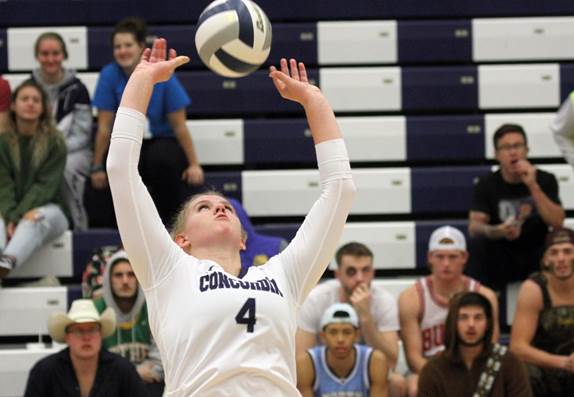 Head coach Ben Boldt’s 17th-ranked squad has reached the point where it truly believes it will win no matter the opponent. Thus why it feels like it let an opportunity slip away against a highly-rated foe. Concordia (21-4, 10-4 GPAC) had its six-match win streak snapped.

“They have a really good blocking team,” Boldt said. “They took us out of what we wanted to do there in that last set. It started off with a couple of errors and it kind of spiraled from there. We told our team, we’re not going out tipping. We’re going to go after it. I took two early timeouts (in the fifth) set and said the only way we’re getting back in this is to be the woman. We did our best … It shows us where we need to get better.”

It looked like it may be a celebratory night in Seward after a Bulldog hustle play led to a Jamestown error to cap the third set. Concordia had effectively bounced back from the opening set to take the next two. From the right side, sophomore Arleigh Costello really got going in the third set when she hammered four of her team high 13 kills. Emmie Noyd (12) and Kara Stark (11) also reached double figures in kills.

The Bulldogs actually had two more kills (50-48) than the Jimmies, but the overall defensive play of Jamestown made the difference. Standouts Britta Knudson and Corina Ruud were in on eight blocks apiece as Jamestown owned an 18-9 advantage in blocks. Knudson blocked back-to-back Concordia attacks in the fifth set in leading a Jimmie runaway.

There were 51 combined errors (attacks/services) by the Bulldogs, who happened to fall victim to one of their own service errors on match point. Concordia was outhit, .135 to .076. Tara Callahan compiled 42 assists while Marissa Hoerman led all players with 25 digs.

Knudson added 13 kills for Jamestown (23-4, 11-2 GPAC), which is now in command of the No. 2 spot in the GPAC standings. Both of the Jimmies’ GPAC losses have come at the hands of top-ranked Northwestern. Jamestown will remain in Nebraska to play at No. 24 Midland on Friday.

The Bulldogs will be back in action for a rare Sunday matinee when Dakota Wesleyan (20-9, 4-9 GPAC) makes a visit to Walz Arena for a 3 p.m. CT first serve. It will be senior day for Concordia, which will honor a group of seven seniors prior to the match.