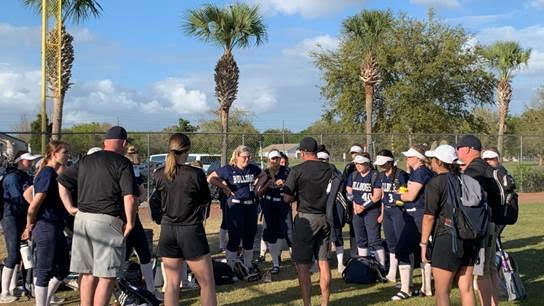 “It was a great day,” Semler said. “We are still trying to work on defense and shoring up little things. We are starting to fill in some of the lineup pieces we think will be good for us starting conference play, but we’re still searching for a couple of starting spots. Hopefully the rest of the trip gives us some clarity.”

Already a two-time first team All-GPAC selection, Haro is batting a cool .600 (18-for-30) on the young season after another bid day on Monday. She helped set the tone by delivering an RBI double as part of four-run first inning versus Carlow. Haro also singled in a run in the second and doubled in another in the fourth. Some sloppy defensive play on Carlow’s part also factored into the run scoring.

In the circle, freshman Zoe Flores (3-1) produced the best outing of her young career. She surrendered just one hit in a five-inning, run-rule shortened shutout masterpiece. The Port LaVaca, Texas, native also struck out eight batters and allowed two walks. She retired the final 12 hitters she faced.

The Bulldogs overcame a 3-0 deficit to win over Hannibal LaGrange. Haro got Concordia on the board with a solo blast in the third. The big explosion came an inning later when the Bulldogs pushed across six runs. The outburst was aided by run-scoring hits from Regan Karel (single), Dalaney Nance (single), MacKinsey Schmidt (single) and Camry Moore (double). Kylee Nixon added an insurance run in the sixth with a sac fly. Nixon and Tori Homolka contributed two hits apiece in the win.

Moore worked the first four innings versus Hannibal LaGrange and moved her record to 5-0. She allowed only one earned run in four innings. Nance followed her by getting the final nine outs and picked up the save. A Gilbert, Ariz., native, Nance has been added to the pitching mix to provide more depth.

Added Semler, “Hhana continues to hit at an unbelievable pace and the middle of our lineup is strong. Flores had a good outing and Camry settled in after a shaky defensive start behind her. Dalaney keeps getting some innings in the circle and improves so much each time out so we are excited about the depth she adds to our pitching.”

Concordia will have a day off on Tuesday before returning to action in Kissimmee on Wednesday for games against the University of Michigan-Dearborn at 9:15 a.m. CT / 10:15 a.m. ET and Fisher College (Mass.) at 2:30 p.m. CT / 3:30 p.m. ET. Thursday will mark the final day of softball in Florida.