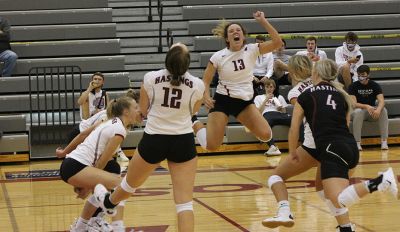 Hastings, NE – The Hastings College volleyball team opened up Great Plains Athletic Conference action by defeating College of Saint Mary 25-18, 24-26, 25-11, 25-19 on Wednesday night inside Lynn Farrell Arena. It was a game of runs for the Lady Broncos on Wednesday night as Hastings would take advantage of its size and athleticism up front. An early tight set one would see Hastings take the first bite of the match following an attack error by the Flames which ignited a 5-0 run. Ireland Currey (JR/Lincoln, NE) followed suit with a service ace followed by a Marlee Taylor (SO/Thedford, NE) kill. Two more attack errors by CSM and a kill from Danielle Bruha (SR/Ord, NE) paced HC to a 12-7 lead.

Hastings was really able to open the lead up late in set one leading 19-13 as Emily Krolikowski (JR/Cairo, NE) picked up a kill followed by a Taylor, Amani Monroe (JR/Colorado Springs, CO) block, a set error by the Flames and then a Jaydin Schake (SO/Amherst, NE) kill pushing the lead to 23-13 as the Lady Broncos held on to win 25-18. Hastings looked well on its way to opening up a 2-0 lead as HC was leading set two 24-22 but CSM ran off four straight point to steal set two 26-24. The Lady Broncos really showed its might in set three quickly opening up a quick 9-3 lead highlighted by two Krolikowski kills and a few CSM errors. Then Hastings took complete control of the set leading 13-7 when another two errors by the flames sparked a 7-0 run. Then the Hastings block began to make life miserable for CSM as Skoch and Sydney Mullin (JR/North Platte, NE) teamed up for two blocks over the next five points. After the dust settled, HC led CSM 20-7 in set three eventually winning 25-11. During that dominant set, Hastings hit .357 while holding CSM to just .028.

Again, Hastings jumped out to a quick 9-3 lead in set four as Currey recorded her third and final ace that set off the 6-0 run when HC and CSM were tied 3-3. Six straight attack errors with two Skoch, Monroe blocks pushed the lead to six. From there, Hastings never looked back. Skoch finished with a match high 11 kills while hitting .286 and she finsished with 3.5 blocks. Krolikowski added eight kills while hitting .241 and Mullin added six kills hitting .250. Monroe added four kills but her 4.5 blocks were key to controlling the net. Makenna Asher (FR/Hastings, NE) led Hastings with 17 assists while Claira Thede (SR/St. Paul, NE) added 13. Currely finished with a team high 18 digs to go along with her match high of three service aces. For the match, Hastings hit .177 while holding the Flames to .084. HC finished with 13 blocks compared to just five for CSM. Hastings improves to 2-1 (1-0) on the year and will be back in action Wednesday Sept. 16 as Midland comes to town with first serve set for 7:30 p.m. inside Lynn Farrell Arena. 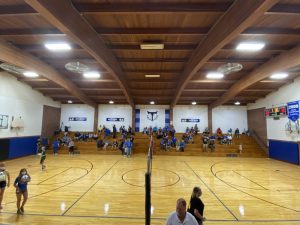 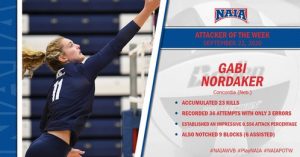 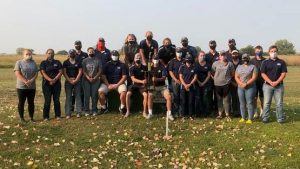 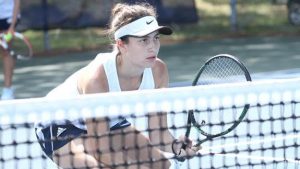