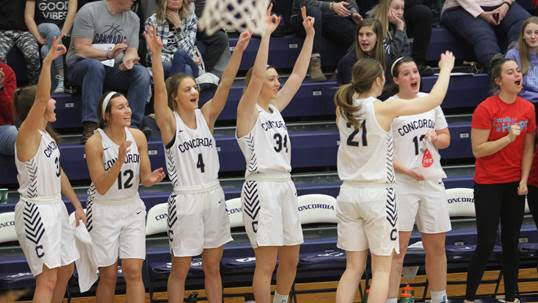 SEWARD, Neb. – It did not take long for this one to become one-sided. A starting lineup of all seniors blitzed Mount Marty from the start as the third-ranked Concordia University women’s basketball team celebrated a class of six seniors. Senior MacKenzie Helman sizzled in spearheading a 94-51 Bulldog victory inside Walz Arena on Saturday (Feb. 15).

The accomplished senior class, headlined by the likes of Grace Barry and Philly Lammers, has dropped only one home game their entire careers. Fourteenth-year head coach Drew Olson’s squad is now 26-2 overall and in first place in the GPAC at 19-1.

“They really did start great,” Olson said of the seniors. “I thought our offense was clicking early on. It just shows their focus going into each game … it’s such a special group. They have an incredible résumé on the court, but it’s about the stuff they do off the court. They’re just awesome people and role models to the little kids in the community.”

Helman and company never gave the visiting Lancers any whiff of an upset. The Bulldogs began the game on a 19-0 run on the strength of a locked-in senior group. Mount Marty missed its first eight shots from field and finished the game at 31.6 percent shooting while paired with 32 turnovers. On the other end, Concordia got back to lighting it up after its rough and tumble affair with Hastings on Wednesday. The Bulldogs scorched the nets with 16-for-29 3-point shooting.

Helman has been on a tear in the back half of her final collegiate season. She made all six of her shot attempts on Saturday, including five from 3-point range. The Pius X alum has sank 30-of-61 3-point tries since New Year’s Day. Her line on senior day featured 17 points, eight assists and four steals. Helman is certainly doing her part in the pursuit of another GPAC title.

“It’s awesome – just what we’ve worked for as seniors,” Helman said. “We’re getting an opportunity that not many teams get

“I can’t get open on my own. My teammates are creating that opportunity for me. It’s really a team effort.”

Helman got the nod in the starting lineup along with classmates Colby Duvel, Philly Lammers, Taryn Schuette and Riley Sibbel. Together they helped the Bulldogs to a commanding 59-23 halftime advantage. Lammers recorded 11 points and five rebounds (putting her seven rebounds shy of 1,000 for her career). Off the bench, Chloe Schumacher (11) and Barry (10) also reached double figures.

The seniors never have lost to Mount Marty (13-14, 7-13 GPAC), which is in a battle with the likes of Briar Cliff and Midland for the final spot in the GPAC tournament. Bailey Kortan led the Lancers with 14 points.

The senior day ceremony took place at halftime of the Bulldog men’s game. Olson took the mic and paid tribute to a class he’ll always hold near and dear to his heart. Said Olson in front of the crowd, “I love you all more than you will ever know.”

Shortly after the contest ended, Concordia learned it had moved into sole possession of first place in the GPAC standings due to Hastings (18-2 GPAC) falling at Dordt. Olson’s group still has to close the deal next week. Said Olson, “I don’t think it really changes anything. We know we have two tough opponents and we’re on the road, so we have to be focused and go to work each time.”

As Olson mentioned, the Bulldogs will be on the road twice next week during the final week of the regular season. Concordia will be at Midland (11-16, 7-12 GPAC) on Wednesday for a 6 p.m. CT tipoff in Fremont. The first regular-season meeting between the two sides occurred way back on Nov. 12 in what resulted in a 93-70 home win for the Bulldogs.