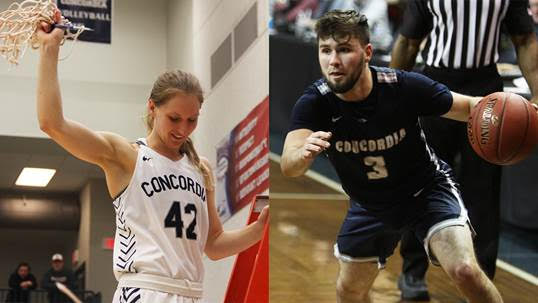 Lammers and Sloup were announced as 2019-20 Senior Athletes of the Year on Monday (June 29). The award winners are selected based upon the athletic department vision components of Christian character, academic achievement and competitive greatness.

Said Director of Athletics Devin Smith, “I thoroughly enjoyed watching Philly and Brevin develop on the basketball court over the past four years. Both were influential leaders on campus and members of GPAC championship teams that raised the profile of their respective programs. Philly and Brevin are the type of well-rounded student-athletes that embody what Bulldog Athletics are all about: servant leadership, commitment to excellence academically and athletically and Christian character.”

Lammers will go down as one of the most accomplished student-athletes in the history of Concordia Athletics. A four-time first team All-GPAC honoree during the winningest four years ever for Bulldog women’s basketball, Lammers leaves a lasting legacy. Named an NAIA Liston Award winner for athletic and academic excellence, the Millard West High School product and Omaha native appeared in 146 collegiate games and helped the program to a four-year record of 137-10 during a stretch that also included four GPAC regular-season titles, four GPAC tournament championships and a national title in 2019. The program also reached the national semifinals in 2017, the national title game in 2018 and ended 2020 ranked No. 1 in NAIA Division II.

Said Coach Olson, “I am very thankful for the four years I had coaching Philly. She is an amazing person – relentless worker, selfless, intelligent, driven. On the floor she was the most physically dominant player with her size, strength, speed and agility that the NAIA rarely sees. Her and her teammates over the past four years have taken this program to another level accomplishing the unheard of – 137-10 record, four GPAC regular season championships, four GPAC tournament championships, three-straight NAIA final fours, and reaching the pinnacle of the 2019 NAIA National Championship. She was a driving force to these accomplishments. Individually she accomplished something no GPAC player has ever earned – GPAC Freshman of the Year (2017), GPAC Most Valuable Player (2019), GPAC Defensive Player of the Year (2020). No one worked harder than her. No one sacrificed more than her. I think Philly’s ability allowed us to change what we did defensively and provide a dominant post presence offensively. I have a lot of great memories of coaching Philly. I think of some of her big games, dominating the 2020 GPAC tournament championship game, the 2019 NAIA semifinal game against Northwestern and the rebound she had in transition. I think of how many times she fouled out, HA! I also think about all the individual workouts we did and the deep conversations about faith and life. Philly is a special person, one of the best players ever at Concordia, and well deserving of athlete of the year.”

Even amongst the many stars to have played for head coach Drew Olson, Lammers stands out. She is the program’s only player to ever be named first or second team All-America all four years (first team three times). In her career, Lammers was GPAC Freshman of the Year (2016-17), GPAC Player of the Year (2018-19) and GPAC Defensive Player of the Year (2019-20). She concluded her remarkable run with program all-time rankings of second in points (2,033), second in blocked shots (181), third in rebounds (1,026) and fourth in steals (357). Among her many honors, Lammers has also been named a CoSIDA Academic All-American, an NAIA Scholar-Athlete and a three-time honorary captain of the Omaha World-Herald All-Nebraska basketball team.

Sloup developed into the top offensive playmaker for Concordia men’s basketball over his junior and senior campaigns. The Seward High School alum earned the nickname “The Mayor,” particularly with his signature 33-point performance in an upset of seventh-ranked Briar Cliff in January 2019. This past season, Sloup led the Bulldogs on a thrilling run highlighted by a GPAC tournament championship game victory at No. 11 Dakota Wesleyan. Sloup made two critical free throws in the closing stretch that allowed Concordia to clinch the program’s first national tournament bid since 2005. As a senior, Sloup averaged 15.8 points and shot 40.1 percent from 3-point range.

Said Coach Limback, “Each of his four years, Brevin made an impact on this program. Pushing the seniors his freshmen year. Helping to hold the team together after a tough sophomore. Developing into a team leader and an all-conference player his junior year. And capping it off his senior year as an honorable mention All-American and helping us to a GPAC tourney title. After a 15-year drought, Brevin helped to get Bulldog Basketball back to the National Tournament and will be mentioned among the all-time greats here at Concordia. There has been a lot of talk recently about “grit” or “perseverance” as traits you need to have to be successful in life. This is what Brevin displayed throughout his time here at Concordia. Each year, Brevin kept competing. What he lacked in size or speed he made up for in heart. If there were big moments, Brevin wanted in on them. Brevin was a true gym rat and I’m not sure I’ve ever coached a player that loves the game of basketball more than Brevin. Off the court, his sincerity and humble demeanor make him a joy to be around. Three memories that stand out to me on Brevin:

No. 1: His epic night (career high 33 points) at home against Briar Cliff his junior year.

No. 2: The free throws at the Corn Palace in the GPAC tourney championship. The place was literally shaking…he had missed a couple FTs before that and he stepped up and nailed them both to help seal the win.

No. 3: Brevin’s freshman year, we had a student-athlete from our team ask to get baptized here at Concordia. When I asked this student-athlete what had been helping him to grow in his faith, he mentioned Brevin had been inviting him to church. This really stood out to me because Brevin was already making an impact on our team as a freshman – off the court! And despite his many accolades, Brevin is more than just a basketball player.”

In the aftermath of the 2019-20 campaign, Sloup garnered first team All-GPAC, NAIA honorable mention All-America and Omaha World-Herald All-Nebraska Team accolades. He was also tabbed a second team all-conference selection as a junior in 2018-19 when he averaged 16.4 points per game. On the program’s all-time lists, Sloup lands at No. 9 in 3-point field goals (220), No. 13 in assists (250) and No. 18 in points scored (1,246). Also the all-time leading scorer in Seward High School history (1,179 points), Sloup picked up three GPAC Player of the Week awards in his career. Over his four seasons, the Bulldogs had a combined record of 77-49.

The Concordia Senior Athletes of the Year are normally recognized as part of the Concordia Athletic Hall of Fame banquet that takes place each year during homecoming weekend. Due to COVID-19 concerns, Concordia Athletics has not yet determined whether the banquet will be held in 2020. An announcement will be made at a later date.

Past Senior Athletes of the Year (since 2001)