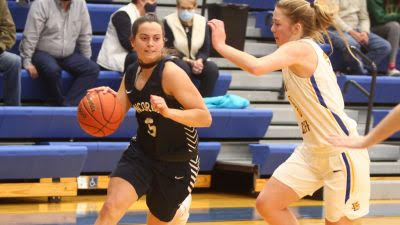 SIOUX CITY, Iowa – The six-game win streak fell by the wayside on Saturday (Dec. 5) afternoon at Briar Cliff. The Concordia University Women’s Basketball team was limited to 23.1 percent shooting in a 69-59 loss at the hands of the Chargers. The 11th-ranked Bulldogs leaned heavily upon the scoring exploits of Taylor Cockerill (game high 22 points) in a contest played at the Newman Flanagan Center in Sioux City, Iowa.

Fifteenth-year Head Coach Drew Olson’s squad had not suffered a defeat since Nov. 10 versus Midland. Concordia (6-4, 5-2 GPAC) did not get it done on the offensive end this time around while up against an improved Briar Cliff squad.

“They have a good team and they play hard,” Olson said of the Chargers. “Konnor Sudmann’s a really, really good player. You just look at the box score – we shoot 8-of-42 from three. We couldn’t make a basket. We have to have people step up. It’s part of the process. We’re learning and growing.”

The Chargers (7-1, 5-1 GPAC) have reversed their fortunes under the direction of first-year Head Coach Brita Hand. In this particular outing, Briar Cliff followed the lead of the likes of Sudmann (22 points, 14-for-14 from the foul line) and Madelyn Deitchler (16 points and 18 rebounds). Sudmann and company enjoyed a large advantage at the free throw line, where they went 29-for-33 (.879).

Foul shooting and impressive results on the defensive end made the difference for the host. The Bulldogs dug a 10-point deficit early in the second quarter and did not have the offensive production to recover. Concordia shot 25.7 percent (9-for-35) in the first half and even worse (20.9 percent; 9-for-43) over the final 20 minutes. The Chargers maintained a lead of 10 or more for the entirety of the fourth quarter.

Cockerill’s fine afternoon included 12 rebounds and four assists in 36 minutes of action. Taysha Rushton (14) and Mackenzie Koepke (10) were the only other double-figure scorers for the Bulldogs. A plus-eight advantage in turnover margin (21-13) played a role in Concordia having 31 more field goal attempts than Briar Cliff. The Bulldogs managed to make only 18-of-78 tries from the field.

The Chargers endured their only loss in Wednesday’s matchup with Northwestern. In the latest Briar Cliff win, Kennedy Benne (10) joined Sudmann and Deitchler in double figures in scoring. The Chargers owned a 51-44 edge on the boards.

Due to the postponement of the scheduled home game versus Mount Marty on Dec. 9 (makeup date will be Dec. 30), the Bulldogs will wait until next Saturday (Dec. 12) to return to play. On that date, Concordia will be back in Sioux City to take on 24th-ranked Morningside (6-1, 4-0 GPAC).