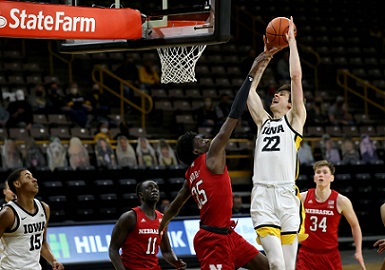 Mayen, who had 25 against Rutgers on Monday, posted his first career double-double with 14 points, including 4-of-8 from 3-point range, while Kobe Webster led NU with 17 points, including five 3-pointers, and
Dalano Banton added 14 off the bench for Nebraska (7-18, 3-15) which has won just once in Iowa City since joining the Big Ten.

The Huskers got a Mayen 3-pointer to start the second to pull with 19, but Iowa seized momentum with seven straight points, and the Huskers never got within 20 the rest of the evening.

Nebraska will look to bounce back quickly, as the Huskers travel to Northwestern in the regular-season finale on Sunday. Tipoff is set for 12:30 p.m. (CT) and the game will be carried on BTN and the Learfield IMG Husker Sports Network.

Nebraska Postgame Notes
*-Lat Mayen posted his first career double-double with 14 points and career-high 13 rebounds. The 13 rebounds were not only a career high (previous high was 12 against South Dakota), but tied for the most by a Husker this season (Yvan Ouedraogo vs. Doane on Dec. 17).
*-Kobe Webster scored 17 points, including 5-of-8 from 3-point range. It was his highest Big Ten total of the season and most since he had 20 against Georgia Tech on Dec. 9
*-Iowa became the first time to shoot 50 percent against NU since the Huskers returned from its pause on Feb. 6
*-Thorir Thorbjarnarson tied his season and career high with five assists. He has had 10 assists in the Huskers’ last two contests.
*-Nebraska falls to 0-9 this season against ranked teams, including 0-5 against top-10 teams.