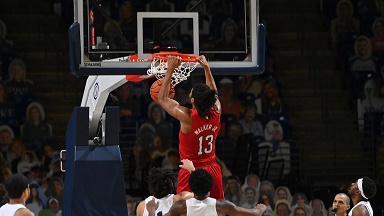 On a field goal from Teddy Allen in the final seconds of the game, the Nebraska men’s basketball team defeated Penn State, 62-61, on Sunday in State College, Pa. The win is the Huskers’ first conference victory since defeating Iowa 76-70 on Jan. 7, 2020.

Allen’s basket with 12 seconds to play ended an eight and a half minute scoring drought for the Huskers (5-12,1-9 Big Ten) and was just his second of two made field goals of the half. The junior led Nebraska with 14 points in the contest.

Nebraska came out firing to start the second half with the team scoring the first five points of the half as Trey McGowens netting the first three. The Huskers put together an 11-point lead with under 10 minutes to play before the Nittany Lions (7-8, 4-9 Big Ten) scored 12 consecutive points to take a 61-60 edge with less than two minutes in regulation.

Nebraska withstood a slow start and battled back in the first half, as the game went to the locker room tied at 35-all. The Huskers shot 50 percent in the opening 20 minutes and got major production from Kobe Webster, who scored 10 first-half points in his first double-figure effort since Jan. 2.

The Huskers trailed 20-12 before Webster’s 3-pointer started a 9-2 spurt that pulled NU with 22-21 after a Derrick Walker dunk with 6:39 left in the half. The Huskers trailed 32-28 before Delano Banton scored five straight points as part of a 7-0 surge to put NU up 35-32 after an Yvan Ouedraogo basket with 1:23 remaining in the half.

NU also had great ball movement in the first half with 12 assists on 15 baskets and just six turnovers after committing three in the first two minutes.

Led by 13 points from Kobe Webster off the bench, Nebraska outscored Penn State 21-10 in bench points. NU also outrebounded the Nittany Lions 39-35 and held the team to 32.3 percent shooting on the day.

Sunday’s win marks just the second time in series history that Nebraska has beaten Penn State on the road and first since 2013. The Huskers picked up their tenth win in the overall series, improving to 10-11 all-time against the Nittany Lions.

Myron Jones led the Penn State scoring effort with 18 points in the contest, including the final six points to give the team it’s final lead of the game. John Harrar grabbed a team-high 11 boards for the Nittany Lions.

The Huskers continue the three-game road trip with a pair of games at Maryland on Tuesday and Wednesday. Tipoff for both games is at 6 p.m. (CT)