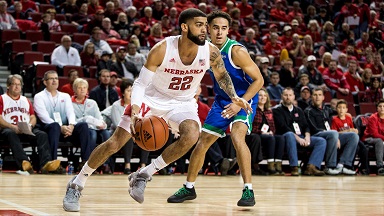 Lincoln, Neb. — Haanif Cheatham had 16 points on Friday night against Rutgers, but it was not enough for Nebraska, as the Huskers dropped their first game of the new year by a score of 79-62 to the Scarlet Knights at Pinnacle Bank Arena.

Caleb McConnell led the way for the Scarlet Knights with 20 points, which included a perfect 8-for-8 from the floor. Myles Johnson finished with a double-double with 18 points and 14 rebounds, tying career highs in both categories. Ron Harper Jr. also had a double-double finishing with 11 points and 10 rebounds.

The big story was inside, as Rutgers outscored Nebraska 52-24 inside the paint and outrebounded 48-31. The 48 rebounds were one shy of tying a season high. Rutgers also had 12 second-chance points, while Nebraska had zero.

An 18-1 first half scoring run gave the Scarlet Knights a 41-28 lead heading into the break while shooting 53 percent from the field in the first half compared to Nebraska’s 27 percent. Rutgers would increase that lead to 22 midway through the second half, as Nebraska would miss six out of their first seven shots. Nebraska was able to cut that lead to 15 but would get no closer.

Nebraska will be back in action on Tuesday night when they take on the Iowa Hawkeyes at Pinnacle Bank Arena. Tipoff is set for 8 p.m. and will be broadcasted live on BTN and can be heard on the Husker Sports Network.