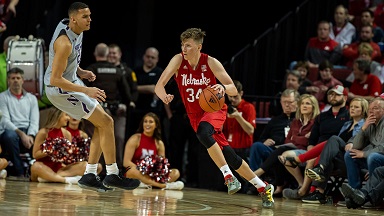 Ann Arbor, Mich. – Nebraska battled back from a slow start to pull within four points at halftime, but No. 25 Michigan started the second half on an 18-4 run on its way to an 82-58 victory Thursday night at the Crisler Center.

Nebraska also shot a season-best 80 percent on free throws, connecting on 12 of 15 attempts.

But the Wolverines, led by Isaiah Livers with 18 points, shot 59.4 percent from the field in the second half to pull away from Nebraska, which was playing without starting point guard Cam Mack for its second consecutive road game.

Back-to-back 3-pointers by Thorbjarnarson and Burke started the run. John Teske hit a short jumper for Michigan, but Kevin Cross scored in the paint and Thorbjarnarson scored a layup to pull the Huskers within 23-22 with 6:52 remaining before halftime.

Nebraska, though, missed its next five field goal attempts while also committing five turnovers. However, Michigan didn’t take full advantage, only extending its lead to 29-22 with 3:59 remaining. Eli Brooks had two 3-pointers in that stretch for the Wolverines.

Cheatham ended Nebraska’s scoring drought of 6 minutes, 52 seconds with a layup off a Michigan turnover. Akol Arop followed with a transition layup off an assist from Thorbjarnarson to pull the Huskers within 29-26 with 1:04 remaining before halftime.

Brandon Johns Jr. hit a 3-pointer for Michigan, and Burke made two free throws, while Michigan missed a shot at the halftime buzzer, with the Wolverines leading 32-28 at halftime. Nebraska held Michigan to 34 percent shooting in the first half, including 5-of-15 on 3-pointers, while the Huskers shot 37 percent and held a 24-18 rebounding advantage in the first half.

Nebraska concludes the regular season Sunday with a noon tip-off at Minnesota. The Huskers will be either the No. 13 or No. 14 seed for next week’s Big Ten Tournament, which begins Wednesday in Indianapolis.