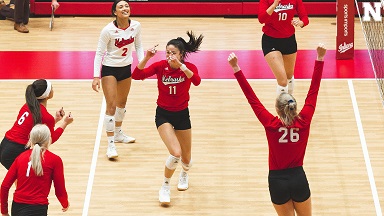 BLOOMINGTON, Ind. – After a 13-month wait, the fifth-ranked Nebraska volleyball team returned to action on Friday night and the Huskers did not disappoint, sweeping Indiana on the road 25-22, 25-20, 25-17 in the season opener at Wilkinson Hall.

Madi Kubik contributed eight kills, and Riley Zuhn started on the right side and had six kills and a team-high four blocks. Junior transfer Kayla Caffey chipped in six kills and three blocks. All five Husker hitters hit at least .250 for the match.

Nebraska had seven service aces with 10 errors, while Indiana also had 10 errors with five aces. Sun had a career-high four aces, including three in a row early in the second set.

The two teams will play again at 5 p.m. (CT) on Saturday.

Set 1: The Huskers got off to a strong start with a kill and pair of blocks by the newcomer Caffey for a 7-3 lead. Back-to-back kills by Sun and Stivrins made it 12-6 Nebraska as Indiana took a timeout. The Hoosiers responded with a 4-0 run to cut the deficit to 14-12, and they drew within one at 17-16 after a pair of Husker attacking errors and a block. An Indiana service error gave NU sideout, and Kubik smashed a kill from the back row before NU went up 20-16 on an Indiana hitting error. After another Indiana timeout, Sun recorded back-to-back kills to increase the lead to 22-16. Nebraska closed out the season-opening set win, 25-22, on a block by Caffey and Zuhn. Both teams struggled offensively with NU hitting .139 and IU hitting .121. Sun had five kills on .714 hitting for the Big Red.

Set 2: Sun served three consecutive aces to get Nebraska off to a 4-1 start. The Hoosiers cut it to 10-9 before Caffey tallied two kills off assists from Hames and Sun and Zuhn tacked on two more for a 15-10 Husker lead. A pair of service errors from each team interrupted the flow of the set, but the Huskers maintained a 20-15 lead after another kill by Stivrins. Stockham answered with a pair of kills for Indiana, but Caffey answered with two of her own to make it 22-18. Kubik and Zuhn terminated before Indiana’s ninth service error of the match gave the Huskers the 25-20 victory. NU hit .429 in the second set while Indiana hit .240.

Set 3: The Huskers reeled off a 5-0 run to claim a 10-4 lead and force Indiana to take a timeout. Zuhn and Stivrins each had a kill and teamed up for two blocks early in the third set. Sun’s 10th kill and an ace by Kubik increased NU’s lead to 16-8. Hames served back-to-back aces, NU’s sixth and seventh of the match, to make it 20-11. Kubik blasted consecutive kills for a 23-14 lead, and the Huskers finished the sweep with a 25-17 win.