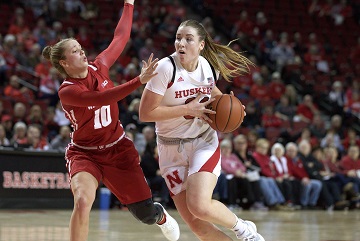 Lincoln — Nebraska used an 11-0 first-quarter run, and an explosive 14-point run over a 5:25 stretch in the third and fourth quarters on its way to an impressive 65-50 women’s basketball victory over Wisconsin on Thursday night at Pinnacle Bank Arena.

Sophomore guard Leigha Brown fueled a strong performance by the Big Red bench, leading the Huskers with 15 points on 6-of-10 shooting, while freshman forward Isabelle Bourne added career bests off the bench with 11 points, eight rebounds and two blocked shots. The Nebraska bench outscored the Badger reserves 29-9 on the night to help the Huskers improve to 13-2 overall and 3-1 in the Big Ten. It is Nebraska’s best 15-game start to a season since opening 14-1 in its first year in the Big Ten in 2011-12.

Sophomore guard Sam Haiby led the Nebraska starters with 11 points, seven assists and three steals, while senior guard and Wisconsin native Hannah Whitish added eight points, including back-to-back threes to open the fourth quarter as part of NU’s 14-0 run. Her second three, which came in transition off a pass from Haiby, put the Huskers up 54-35 with 8:12 left in the game and forced a timeout. Fifty-two seconds later, Bourne scored in transition to give Nebraska a 56-35 lead and force another Wisconsin timeout. The lead grew as large as 25 at 62-37 on a Nicea Eliely layup with six minutes left in the game.

Wisconsin, which slipped to 9-6 overall and 1-3 in the Big Ten, was led by forward Imani Lewis, who notched her fourth straight Big Ten double-double to open league play with 18 points and 10 rebounds. However, she was the only Badger to produce double figures in points or rebounds on the night.

For the game, Nebraska hit 48.2 percent (27-56) of its shots from the field, including 35 percent (7-20) of its three-pointers. The Huskers went 4-for-5 from long range in the first quarter to overcome a fast start by Wisconsin, which held a 10-5 lead just 3:45 into the game. However, the Huskers responded with an 11-0 run to take a 16-10 lead after eight straight points, including a pair of threes from Brown, before a three-pointer by Haiby capped the run with 43 seconds left in the quarter.

Wisconsin then went without a field goal for nearly the first five minutes of the second quarter as Nebraska took its first double-digit lead of the night at 24-13 off a Whitish bucket with 6:10 left in the half.

The Huskers took a 30-21 lead into the locker room at halftime behind 10 points from Brown, seven from Haiby and the first five points of the game from sophomore starter Ashtyn Veerbeek. In the half, Nebraska freshmen and sophomores combined for 28 of NU’s 30 points.

Nebraska controlled the boards, 38-28, on the night and outscored Wisconsin 10-6 in second-chance points and 15-7 in points off turnovers, although Wisconsin won the turnover battle, 16-14. The Huskers held the Badgers to just 35.7 percent (20-56) shooting, including just 3-of-10 from three-point range.

Although the Huskers battled foul trouble for much of the night, Wisconsin only converted 7-of-10 free throws in the game, while Nebraska hit 4-of-5 free throws. The Badgers were called for just 11 fouls in the contest.

Nebraska returns to road Big Ten action on Sunday by traveling to Rutgers on Sunday afternoon. Tip-off between the Huskers and Scarlet Knights is set for 1 p.m. (CT) with live radio coverage on the Husker Sports Network and a live video stream for BTN+ subscribers.