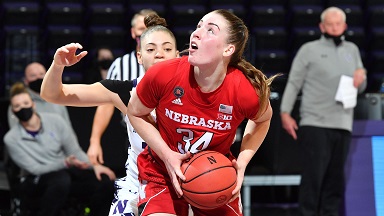 Evanston, Ill. – Kate Cain produced a perfect shooting night on her way to tying her career high with 22 points, while Isabelle Bourne added 21 points and a career-high 17 rebounds to lead a furious Nebraska rally on the road to claim a 71-64 women’s basketball win over No. 24 Northwestern at Welsh-Ryan Arena.

Cain, who became the 34th 1,000-point scorer in Nebraska history with her layup after winning the opening tip, went a perfect 7-for-7 from the floor and 8-for-8 at the free throw line, including all six of her free throw attempts in the final 40 seconds to seal the Husker rally from a 14-point second-quarter deficit against the defending Big Ten co-champions.

Cain scored 10 points during Nebraska’s 31-point fourth-quarter eruption, after the Huskers trailed 44-40 at the end of the third period. She added eight rebounds and two blocks in the contest.

Bourne was just as big for the Big Red, which improved to 10-9 on the season and 8-8 in the Big Ten as the only team in the conference to record four wins over AP Top 25 teams at game time. The Huskers completed a season sweep of the Wildcats, who slipped to 11-5 overall and 9-5 in the league.

Bourne’s three-pointer with 8:55 left in the game gave the Big Red a 45-44 lead – it’s first edge since leading 2-0 on Cain’s opening bucket. Ashley Scoggin then followed with another three-pointer just 37 seconds later to push Nebraska’s edge to 48-44 and cap an 8-0 run to open the final period and force a Northwestern timeout. Scoggin finished the night with 10 points.

Northwestern stopped the run with a shot by Jordan Hamilton on a baseline out-of-bounds play, but the Huskers refused to lose momentum. Freshman Ruby Porter buried another three-pointer with six minutes left to spark a 7-0 run that included a pair of free throws by Bourne and a bucket by Cain at the five-minute mark to push the Husker lead to 55-46. Porter finished with eight points and four rebounds while making her second straight start in place of an injured Bella Cravens, who missed her first game of the season.

Nebraska also got five points, eight rebounds and seven assists from Sam Haiby, including a traditional three-point play with approximately two minutes left to keep the Husker lead at nine points at 60-51. It was Haiby’s only field goal of the night against the Cats’ ball-hawking defense. Annika Stewart pitched in five points, three rebounds and two blocks off the bench, including a key third-quarter three-pointer.

Nebraska’s nine-point lead came after falling behind 23-9 early in the second quarter, as the Huskers outscored the Wildcats 62-41 in the game’s final 28 minutes. The Husker win also came despite a mammoth 28-4 turnover edge by Northwestern in the game. Nebraska was able to minimize the damage done by the turnovers by out-rebounding the Wildcats, 52-33.

The Huskers struggled in the first half, committing 16 turnovers that Northwestern converted into 16 points, as the Wildcats took a 33-24 lead to halftime. Despite forcing just one turnover by the Cats in the half and shooting just 28 percent (7-25) from the floor, the Huskers trailed by just nine at the break. Northwestern hit 38.9 percent (14-36) shots in the half, but got out-rebounded by the Big Red, 26-14. Bourne led the Huskers with nine points and eight rebounds, while Cain added eight points in the half.

The Huskers showed they weren’t going away by opening the second half with a 6-0 run that started with back-to-back buckets by Cain before a layup by Bourne pulled Nebraska within 33-30. Scoggin pulled the Big Red within two at 35-33 with a three-pointer at the 5:46 mark in the third, before tying the game at 40 with her shot with 1:28 left in the period. Northwestern closed the quarter with a 4-0 run to head to the final quarter with a four-point lead.

While Northwestern was able to convert Nebraska’s 28 turnovers into 26 points and get seven second-chance points, the Wildcats could not get anything going in their half-court offense. They finished the night at 32.1 percent (25-78) from the field including 4-for-20 from three-point range. The Wildcats lost despite attempting 27 more field goals than Nebraska. Northwestern did hit 10-of-14 free throws (.714), including 6-for-6 shooting in the fourth quarter.

Lindsey Pulliam led Northwestern with 22 points on 9-of-24 shooting, while Sydney Wood added 12 points, six assists and six steals. Veronica Burton scored all 10 of her points in the fourth while adding six rebounds and a whopping eight steals. Jordan Hamilton rounded out the Cats in double figures with 10 points and a team-high 10 rebounds to go along with five steals. Overall, Northwestern’s 21 steals tied for the fifth-most by any opponent in Nebraska history.

Nebraska returns to home Big Ten action on Sunday afternoon when the Huskers play host to Penn State at Pinnacle Bank Arena. Tip-off between the Big Red and the Lady Lions is set for 2 p.m. (CT) with a live video stream provided to subscribers of BTN Plus. The radio call of the game can be heard across Husker Sports Network stations, on the Huskers App and on Huskers.com.