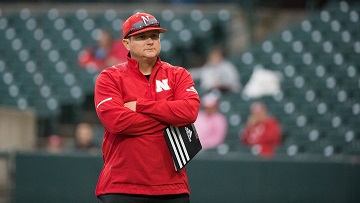 The Nebraska baseball team unveiled its first recruiting class under Head Coach Will Bolt and his staff on Thursday, which includes 10 student-athletes. The seven National Letter-of-Intent signees and three walk-ons will join the Husker program during the fall 2020 semester.

“We are incredibly excited about the quality of talent and character assembled for this year’s class,” Bolt said. “The class is a direct reflection of the hard work of Coach Harvell and Coach Christy on the recruiting trail. These student-athletes exhibit winning traits both on and off the field that will allow them to develop and flourish here at Nebraska.”

An in-state product, Garrett Anglim joins the Huskers from Papillion-La Vista High School. Anglim is the top-ranked outfielder in Nebraska by Prep Baseball Report and Perfect Game, which also selected him as a Rawlings Preseason All-American in 2018. During his junior season in 2019, Anglim earned all-state honors after being among the Class A leaders in several offensive categories, including hits, runs, triples and stolen bases.

Recruiting Coordinator Lance Harvell on Anglim: “Garrett is a really good athlete that has a chance to be a versatile player for us. Given his athleticism, we feel he could make the transition to not only play outfield, but also play third base. We love the strong bat and aggressive approach that he brings at the plate. Garrett has produced at a high level in high school and summer ball against really good competition. We’re really excited about what Garrett brings to our program.”

Stacey Bailey is a junior college transfer from Navarro College in Corsicana, Texas. A top-50 Texas JUCO prospect, Bailey led Navarro to a third-place finish at the 2019 NJCAA World Series. In 56 games during the season, he hit .328 with 15 doubles, 11 home runs (11th-most in the NJCAA) and 71 RBIs (ninth-most in the NJCAA).

Coach Harvell on Bailey: “Stacey is extremely strong and has the ability to run the ball out of the ballpark to any part of the field. We expect him to come in and make an immediate impact as a run producer in the middle of our lineup next year. He is a small town kid with a blue-collar work ethic and knows what it means to grind. He’ll make our team better on and off the field.”

Caleb Bennett comes to Nebraska from Corona Centennial High School in Perris, Calif. Ranked as the No. 27 pitcher in California by Prep Baseball Report, Bennett was also named a 2019 Underclass All-American by Perfect Game.

Coach Harvell on Bennett: “Caleb is a prototypical power pitcher. He has good command of three pitches. His fastball sits at 88-92 mph to both sides of the plate. In addition, he has a power slider at 80-83 mph and a good change-up. As impressive as he is physically with broad shoulders and a strong lower half, his mentality is what will set him apart. His competitiveness and drive to get better are beyond his years and will serve him and our team well during his time at Nebraska.”

Griffin Everitt is a junior college transfer from Kansas City Kansas Community College. Behind the plate, Everitt threw out 71 percent of base runners last season. Offensively, he ranked second on the team in slugging percentage and averaged an extra-base hit every five at-bats.

Coach Harvell on Everitt: “Griffin is one of the best junior college catchers in the nation. He is a game changer behind the plate with his arm. He has a very strong and, more importantly, accurate arm. Offensively, Griffin has a mature approach with gap power and we believe there is more to come in that area. Griffin is a well-rounded player and, as an added bonus, is a hometown kid who bleeds Husker red.”

Brice Matthews hails from Texas, where he attends Atascocita High School. Matthews is ranked as a Top-100 player in Texas and the No. 3 player at his position by Prep Baseball Report. During a breakout junior season, Matthews was selected as the 6A Utility Player of the Year and Greater Houston Area Infielder of the Year. In addition, he earned a spot on the USA Baseball NTIS South Texas Team, Houston Area High School All-Star Team and the Texas High School Baseball Coaches Association All-State Team. Matthews is also the starting quarterback for Atascocita’s football team and was named the Offensive MVP in 2018.

Coach Harvell on Matthews: “Brice is a special athlete. He has a rare blend of both strength and speed, which are the two things we look for and value the most in our position players. To this point in his career, he hasn’t played as much baseball as most of his peers due to his commitments with football. As a result, he’s not even close to realizing his full potential as a baseball player, which is through the roof. We’re incredibly excited that he is a Husker.”

A product of Cold Spring, Minn., Jack Steil joins the Huskers from Rocori High School. The top-ranked shortstop in Minnesota, Steil is the No. 3 overall player by Prep Baseball Report and was named a 2019 Rawlings Preseason All-American by Perfect Game. A multi-sport athlete, he is also the football team’s quarterback.

Coach Harvell on Steil: “Jack is a very talented and highly motivated player. He brings physicality, toughness and competitiveness to our program. As far as tools, there isn’t anything he can’t do on a baseball field. He has a fluid swing and uses the whole field. He can generate bat speed easily to hit for power. He has an exceptional arm across the infield and can play anywhere on the dirt. Jack is our type of guy both on and off the field. We are thrilled he is coming to Lincoln.”

A walk-on from Columbus, Neb., Tyler Palmer attends high school at Scotus Central Catholic. Ranked as the No. 9 overall prospect in Nebraska and the No. 2 outfielder by Prep Baseball Report and Perfect Game, Palmer was also tabbed an Underclass All-American in 2018 and 2019. He had a stellar career on the gridiron as a quarterback and safety, earning all-state honors.

Coach Harvell on Palmer: “Tyler may very well have the most speed of anyone in this class. He is a versatile, multi-sport, pure athlete and flashes power at the plate. Tyler has the arm, actions and ability to lock down center field or come and play on the infield if needed. He is going to come in and compete right away, not only because of his talent, but also because that’s what type of kid he is.”

Will Walsh comes to Nebraska as a walk-on from Rockhurst High School in Leawood, Kan. Ranked as the No. 6 left-handed pitcher in Kansas by Prep Baseball Report and No. 3 LHP by Perfect Game, Walsh is also an Underclass All-America selection.

Coach Harvell on Walsh: “Will is as competitive of a kid as they come. When he toes the rubber, he’s on the attack from the word ‘go.’ Will has a really good three-pitch mix. His fastball is mid-80s with some natural tilt, but given his size and arm action, it’s easy to project a jump in velocity. He has a sharp 12-to-6 curveball and good command of his change-up. He is the type of player that every championship team has on the roster because of his tremendous work ethic. He knows how to get hitters out and he’s a winner. We’re thrilled that he’s a Husker.”

A walk-on from Omaha, Neb., Drew Wessel attends high school at Millard South. An Underclass All-American by Perfect Game, Wessel is the No. 3 catcher in Nebraska and No. 10 overall prospect by Prep Baseball Report. As a sophomore in 2018, he batted .408 en route to second-team Super-State honors and helped Millard South to a runner-up finish at the state tournament. During his junior season in 2019, he earned first-team All-Nebraska and first-team Super-State accolades.

Coach Harvell on Wessel: “Drew is rock solid defensively behind the plate. He is a well above average receiver, blocker and has a very good arm. He also comes from an extremely competitive and well-coached program at Millard South. Drew is a bit of a rare breed these days because he has a ‘team first’ mentality in everything that he does. We don’t often see that kind of selflessness from players all the time. That combined with his passion for the University of Nebraska, we know he is going to make a positive impact on our team.”

Efrain Cervantes is a junior college transfer from South Mountain Community College in Arizona. As a freshman last season, Cervantes hit .300 with 13 doubles and three home runs in a wood bat league and was named to the ACCAC All-Region and all-conference teams. During the fall, he was one of the top performers in the Arizona Fall JUCO All-Star game.

Coach Harvell on Cervantes: “Efrain is a premium defender in the infield. He can make every play, has smooth actions, a plus arm and outstanding range. He has produced at every level and we don’t expect that trend to stop in his time at Nebraska.”