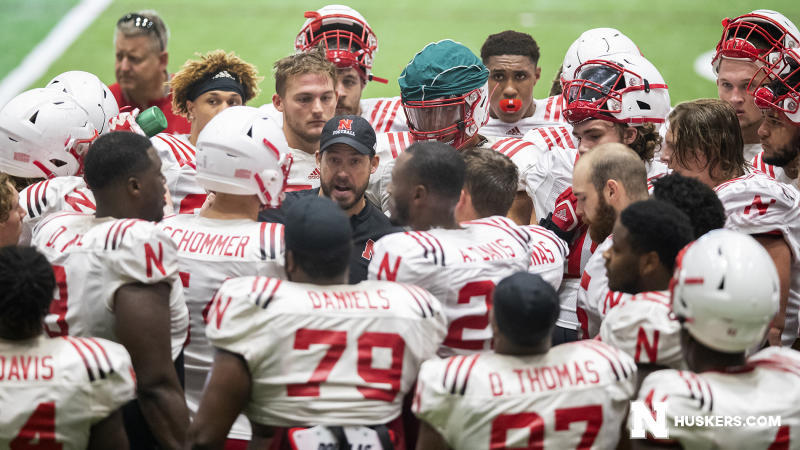 Lincoln, Neb. — The Nebraska football team practiced for just over two hours Monday morning inside the Hawks Championship Center and outside on the Ed and Joyanne Gass practice fields.

Following practice, defensive coordinator Erik Chinander spoke to the media about how the defense began the week of practice.

“I know Coach Frost maybe said the offense didn’t come out as much as he wanted to, but we came out on defense,” Chinander said. “We made a few mental errors when we got tired. He (Frost) gave us a lot of tempo periods today. I thought the energy was really good. There hasn’t been one day where I have been disappointed with the energy of the team. We still got things to work on. We’re not there, but the energy has been really good.”

Chinander continued by sharing his thoughts on the situational scrimmage the team held last Friday.

“I thought we were really good with the ones and twos units,” he said. “You know the threes kind of had that half of football at the end. We have some work to do to develop those young guys. The ones and twos made some good plays and some dumb plays in situations. For instance, we picked off a ball to end the game and instead of just getting down with it, we tried to run it back for a touchdown. Those guys just have to learn those things. It’s really important that Coach (Frost) puts us in those situations, so we can have it happen on August 18 instead of September 30.”

Chinander was then asked about what he has seen from matchups between the offensive and defensive lines.

“It’s really good that in this camp, Coach Frost has gone a lot of ones versus ones,” Chinander said. “He wants a physical practice, so our best guys get their best guys everyday. That’s making us better, and that is making them better. Anytime our d-linemen get to go up against (Matt) Farniok or Brandon (Jaimes) and some of those guys, it is really good for us. Those receivers are causing us some fits out on the perimeter, but it’s really good to see it in practice. I am glad we are doing one on ones and two on twos and good versus good for the majority of camp.”

With the first game less than two weeks away, Chinander talked about some of the tough decisions he and the coaching staff will need to make regarding the depth chart.

“I think there’s some hard things going on yet,” Chinander said. “The defensive backs, there’s five or six guys that can be starters, and we’ve got to find a way to figure out who is going to walk out there for the first snap. That d-line is pretty deep. What do you do with JoJo (Domann)? Is he ready? The inside linebackers we got three guys, but those are good problems.

“I think what you guys are going to see and what everyone is going to see is a lot of guys rotating in, and I think we need that. Whether you are a starter or not, I would love to have 22 starters and roll that thing through and keep everyone fresh as many reps as we play on defense. There is definitely going to be some decisions on who is out there for the first snap.”

The Huskers will continue fall camp on Tuesday in preparation for the first game against South Alabama on August 31.

BTN Bus Tour Stop Show Airs Tonight
The annual Big Ten Network Bus Tour was in Lincoln today to take in this morning’s Husker football practice and will give fans an inside view of the Huskers for the upcoming season with its show this evening.

The 60-minute show features interviews with Head Coach Scott Frost and Husker players Adrian Martinez, JD Spielman and Mohamed Barry, as well as mic’d up segments with Offensive Coordinator Troy Walters and Offensive Line Coach Greg Austin. Other content will be available throughout Monday on BTN Channels on Social Media (@NebraskaOnBTN, as well as BTN on both Instagram and Facebook.