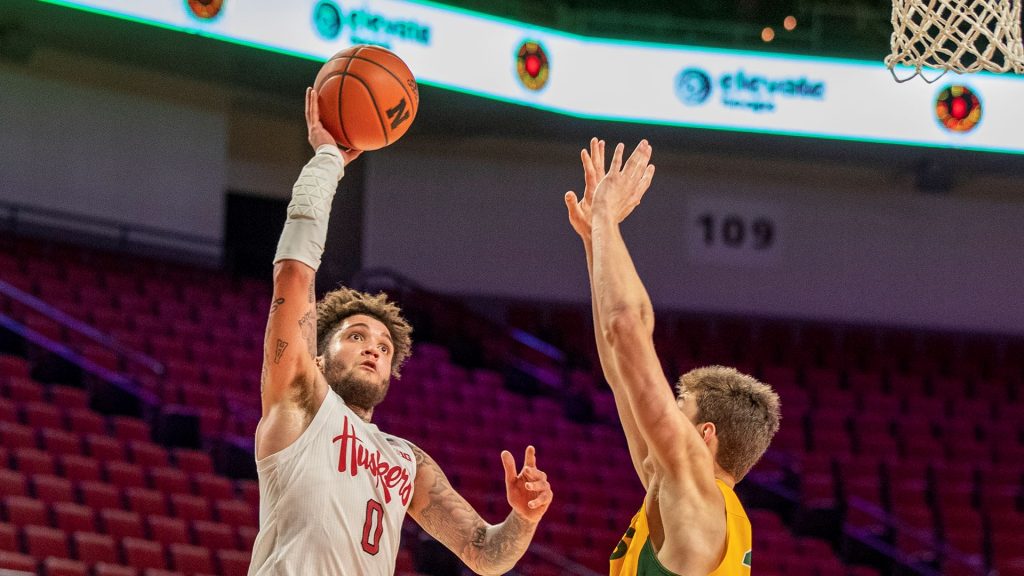 Lincoln – Nebraska road a 19-4 game-opening surge and a huge second half from Teddy Allen as the Husker men’s basketball team worked its way to a 79-57 victory over defending Summit League champion North Dakota State in the final game of the Golden Window Classic at Pinnacle Bank Arena on Saturday.

Allen scored 17 of his game-high matching 22 points in the second half, including seven points in a 2:02 span late in the game as Nebraska pushed its lead to 20 points for the first time with four minutes left. Allen added seven rebounds and a game-high five steals to help the Huskers improve to 2-1 while the Bison slipped to 0-2.

Trey McGowens added 19 points as four Huskers finished the game in double figures. Dalano Banton came within striking distance of a triple-double with 12 points, nine rebounds and eight assists before exiting the game with two minutes left and the Huskers leading 74-51. Lat Mayen rouded out the Huskers in double figures with 12 points, including a trio of three-pointers.

Nebraska led from start to finish thanks to a hot shooting start. The Huskers opened 4-of-5 from three-point range beginning with a three from Thorir Thorbjarnarson, followed by a three from Allen before Mayen’s second triple in a 40-second span gave the Big Red a 19-4 lead just 5:47 into the game.

North Dakota State rallied to trim the Husker margin to seven points on three occasions in the half, with the last one coming on a buzzer-beating three-pointer by Jaxon Knotek to cut NU’s margin to 43-36 at halftime.

The Huskers shot 50 percent (16-32) from the field in the first half, including 5-of-13 threes, but hit just one of their final eight three attempts in the half. North Dakota State hit 40 percent (14-35) from the floor in the half, including 4-of-15 threes, but cut the margin by hitting three of its last four three-point attempts after opening the game 1-of-10 from beyond the arc. The Bison also cut lead by pounding the offensive glass, scoring 12 second-chance points in the final 5:21 of the half after being held without an offensive rebound in the game’s first eight minutes.

Although NDSU went to the locker room with some momentum, Allen and Mayen quickly shot Nebraska out to its biggest lead of the game at the time (53-37) in the opening five minutes of the second half. Allen scored the first two points of the half before Mayen drained his third three-pointer to make it 48-36 with 18:35 left. After a free throw by North Dakota State, Allen sank a three with 15:41 left, before scoring again on a driving layup with 15:07 remaining to put the Huskers up 16 points for the first time.

North Dakota State was never able to cut the margin to single digits the rest of the way. The Bison did trim the lead to 55-45 on a Knotek three-pointer with 11:32 left, but the Huskers outscored the Bison 19-8 over the game’s final eight minutes to produce the 22-point margin of victory.

Nebraska returns to home action on Tuesday when the Huskers play host to South Dakota. Tip time at Pinnacle Bank Arena is set for 8 p.m. with live television coverage provided by the Big Ten Network and the Husker Sports Network.