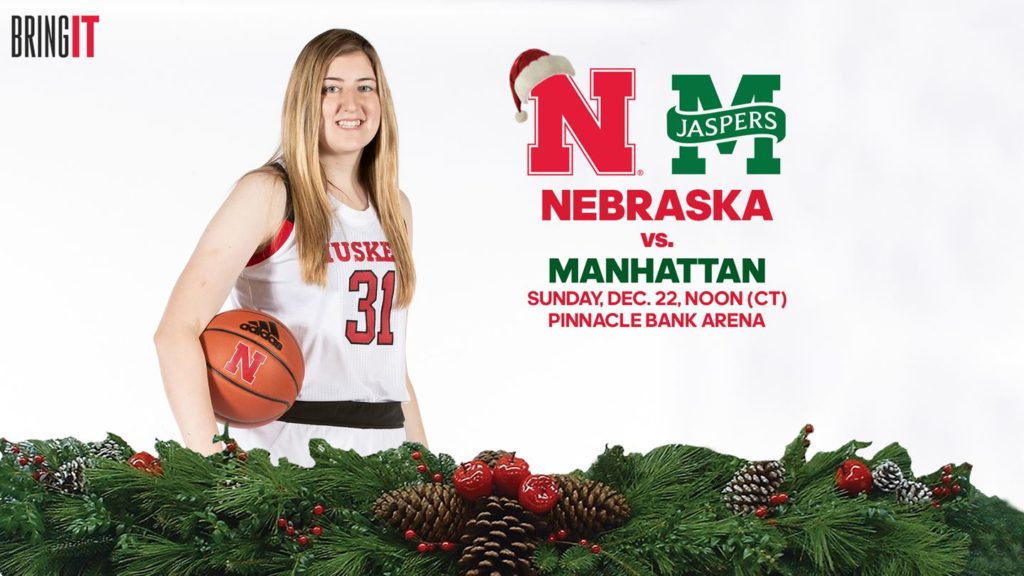 The Nebraska women’s basketball team wraps up its regular-season non-conference schedule by playing host to Manhattan on Sunday in Lincoln. Tip-off between the Huskers (9-1) and Jaspers (3-6) is set for Noon (CT) at Pinnacle Bank Arena, with tickets available now through the Nebraska Athletic Ticket Office at Huskers.com.

A live video stream will be provided to subscribers of BTN+ as a BTN Student U production.

Live radio coverage for Sunday’s game with Manhattan can be heard on B107.3 FM in Lincoln and ESPN 590 AM in Omaha beginning at 11:45 a.m. (CT). Stations across the state will also carry the broadcast on the Learfield-IMG College Husker Sports Network. Free live audio can be found at Huskers.com, the Huskers App and TuneIn.

A limited quantity of Husker holiday ornaments will be available to the first fans inside Pinnacle Bank Arena on Sunday.

Sophomore Sam Haiby earned her second appearance on the Big Ten Weekly Honor Roll (Dec. 16) after producing her second 20-point performance of the season in a 77-67 win over Oral Roberts (Dec. 14). Haiby went 8-for-14 from the field and 3-for-3 at the free throw line while adding five rebounds and snagging a career-high four steals for the Big Red. The 5-9 guard from Moorhead, Minn., ranks second among the Huskers with 10.8 points per game.

Junior Kate Cain had a big game in the win over ORU, pumping in 15 points on 7-of-9 shooting to go along with a season-high eight rebounds and four blocked shots. Cain needs five blocks on Sunday to catch Catheryn Redmon (216, 2008-11) at No. 2 on Nebraska’s career block list.

Cain, a 6-5 center from Middletown, N.Y., has a special connection with the Manhattan program. Her father, Tim, graduated as Manhattan’s all-time leading scorer (1,872 points) and was a two-time honorable-mention All-American by The Sporting News. Nebraska is scheduled to play a game at Manhattan next season.

Scouting Manhattan
• Manhattan brings a 3-6 record on the season to Lincoln for its first-ever meeting with the Huskers.
• While the Jaspers’ record is not glossy, they have been extremely competitive, with four of their losses by eight or fewer points, including two in overtime.
• Manhattan is a coming off a 62-60 overtime loss in its MAAC opener at Monmouth on Tuesday – its fourth road loss of the season. The Jaspers are just 1-4 away from Draddy Gymnasium this season.
• Coach Heather Vulin is in her fourth season leading the Jaspers, who finished with a 12-19 overall record last season that included a 9-9 mark in the Metro Atlantic Athletic Conference (MAAC).
• Junior Courtney Warley, a 6-3 center, is Manhattan’s leading scorer and rebounder at 9.9 points and 7.7 rebounds per game. Warley was the 2019 MAAC Defensive Player of the Year and was a third-team All-MAAC selection. She was also a member of the MAAC All-Rookie Team in 2018. Last season she led the MAAC with 9.1 rebounds and 1.8 blocks per game, while ranking fourth in the conference with 2.1 steals per game. She had 16 points, nine rebounds, two blocks and three steals in 44 minutes against Monmouth.
• Junior guard Lynette Taitt joined Warley in the starting five for each of the first seven games to open the season. She is averaging 6.2 points and a team-best 2.1 steals per game. Taitt also ranks second on the team with 2.3 assists, but has not hit a three-pointer on the season. Taitt had 14 points, six rebounds and five assists in Manhattan’s win over Army (Dec. 13), her first game coming off the bench. She came off the bench again at Monmouth (Dec. 17) but suffered a leg injury.
• Freshman Emily LaPointe, a 5-10 guard, has added a scoring spark for the offense by averaging 9.6 points per game. She is also tied for second on the team with 13 three-pointers. LaPointe had eight points, six rebounds, three assists and two steals in 40 minutes at Monmouth.
• Sophomore Sydney Watkins leads Manhattan with 18 threes while shooting 38.3 percent from long range. The 5-8 guard has managed 6.8 points per game, but was shut out by Monmouth on 0-for-5 shooting from long range.
• Senior Julie Høier rounds out Manhattan’s projected starting five with 6.1 points and 4.0 rebounds per game. The 6-2 forward from Aabyhoej, Denmark, is one of four international players on the Jasper roster, joining Sini Mäkelä and Tuuli Menna (Finland) and Christina Katsamouri (Greece).
• Coach Vulin and the Jaspers have experimented with five starting lineup combinations early in the season, as senior Pamela Miceus (4.1 ppg, 4.9 rpg) owns five starts and senior Gabby Cajou (9.3 ppg, 2.0 rpg, 2.8 apg, 1.7 spg) has made six. Cajou erupted for 20 points, six assists and four steals in 42 minutes at Monmouth. Cajou and Miceus were teammates at North Rockland High School in New York.
• Lizahya Morgan also provides consistent contributions for Manhattan off the bench, averaging 5.0 points and 1.7 rebounds in 13.2 minutes per game. Morgan ranks third on the team with 10 threes on the season.
• As a team, Manhattan is shooting 36.3 percent from the field field, including 30.5 percent (51-167) from three-point range. The Jaspers have hit 69.1 percent of their free throws. Manhattan owns a plus-3.8 team turnover margin, but a minus-6.2 team rebounding margin.

Huskers Announce Kissinger Out for Season
• Nebraska women’s basketball coach Amy Williams announced on Dec. 14 that junior guard Taylor Kissinger would undergo hip surgery in early January and be out for the rest of the season.
• Kissinger, who has been bothered by the nagging injury for several months, averaged 8.4 points and 2.8 rebounds off the bench in five games this season. She missed four games in the concussion protocol after playing in the season-opening win over Alabama A&M (Nov. 6).
• In Nebraska’s win over Duke in the Big Ten/ACC Challenge (Dec. 4), Kissinger led the Huskers with 19 points, including a career-high-matching six three-pointers. She also dished out four assists.
• Last season, Kissinger led the Big Ten and ranked No. 4 nationally in three-point field goal percentage (.456, 62-136).
• In her first two season, Kissinger averaged 9.4 points and 3.6 rebounds while competing in 55 games with 31 starts.
• Because she only played in five games this season, Kissinger is expected to regain her junior season of eligibility in 2020-21.