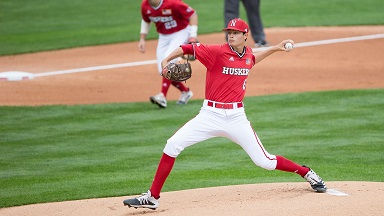 Minneapolis – Behind a career-high 12 strikeouts from Cade Povich the Nebraska baseball team (4-1) opened its weekend at U.S. Bank Stadium on Friday afternoon with a 10-4 win over the Ohio State Buckeyes (3-3). Povich’s 12 strikeouts were the most by a Husker pitcher since May 7, 2010, when Michael Mariot struck out 12 against Southeast Missouri State.

Povich went 6.0 innings on Friday afternoon and along with his career-high 12 strikeouts, allowed three runs on five hits and two walks.

Spencer Schwellenbach accounted for three of NU’s 11 hits, including a double, while freshman Max Anderson continued his hot start to 2021 with his second home run of the season and three RBIs. Jaxon Hallmark recorded his first homer of 2021 when he led off the bottom of the eighth with a first-pitch homer.

Povich retired five straight to start the game, including four strikeouts, before Okuley opened the scoring with a home run into the right field upper deck. Brent Todys followed with a single, but Povich then got an inning-ending ground out to limit the damage to one run.

After failing to score in the first when it had the bases loaded, Nebraska’s offense went right back to work and put up a crooked number in the bottom of the second with five runs on four hits, including a two-run home run from Anderson. Griffin Everitt led off with a walk and quickly two Huskers were in scoring position following Jack Steil’s second double of the season. Joe Acker delivered a two-RBI single, putting the Huskers ahead 2-1. Cam Chick stepped in and executed a bunt single, the fourth straight Husker to reach in the inning. OSU starter Garrett Burhenn responded with two straight outs and was ahead of Anderson 0-1 when the freshman blasted a three-run homer off well over the 381-foot sign in center field.

Working with a 5-1 lead, Povich struck out the side in the top of the third, his fifth, sixth and seventh strikeouts of the game. Povich recorded two more strikeouts in the fourth, bettering his previous career best of eight in a game and then NU’s offense gave him more run support in the bottom of the frame.

Chick led off with a walk, stole second and later scored on a double from Schwellenbach. After a fly out put two outs on the board, Burhenn uncorked a wild pitch and on the very next pitch a passed ball scored Schwellenbach, increasing NU’s lead to 7-1.

Povich allowed his first leadoff baserunner in the fifth when Todys started the inning with a single. Povich responded with his 10th strikeout of the game and then got a fly out, but was unable to post another shutout inning as Wilson snuck a 2-1 offering just inside the left-field foul pole for a two-run homer. Povich came back with his 11th strikeout to end the fifth.

Nebraska pushed its lead back to six in the bottom of the sixth with a pair of runs. With the bases loaded and one out, Efy Cervantes hit a ground ball to second that could have resulted in an inning-ending double play, but Cervantes beat the throw to first to pick up a RBI and a throwing error on the relay allowed another run to score.

Working with a 9-3 lead, Braxton Bragg and Caleb Feekin combined to toss up up zeroes in the seventh and eighth. Hallmark led off the bottom of the eighth with a home run and then Okuley responded with a leadoff homer in the top of the ninth, but Feekin came back and finished off the Buckeyes to secure victory.

The Huskers will be back at U.S. Bank Stadium Saturday morning to play the Iowa Hawkeyes, with first pitch set for 9 AM.