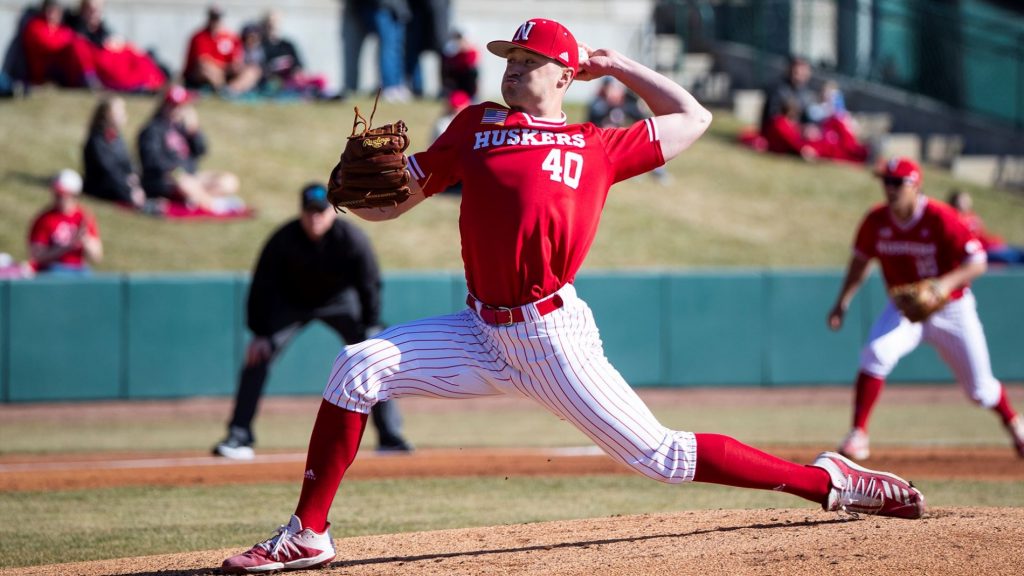 Minneapolis – A trio of two-run home runs from the Ohio State Buckeyes doomed the Nebraska baseball team in its first of two games on Sunday at U.S. Bank Stadium, as Buckeyes posted a 6-4 win. The Huskers tied the game, 4-4, in the bottom of the seventh with a solo home run from Logan Foster, but the Buckeyes answered in the top of the eighth with a two-run shot from Colton Bauer.

The Huskers jumped on OSU starter Will Pfennig with two runs on four hits in the bottom of the first. Mojo Hagge led off with an infield single and then scored all the way from first on a double by Spencer Schwellenbach. Max Anderson moved Schwellenbach to third with a deep fly ball to right center and Jack Steil then picked up his fourth RBI of the season with a groundout. With the bases empty Leighton Banjoff and Griffin Everitt notched consecutive two-out singles before Pfennig struck out Brice Matthews to end the first.

Following a rocky bottom of the first, Pfennig settled in and retired 16 straight Huskers before Banjoff snapped the streak with a leadoff single in the bottom of the seventh. Pfennig went 6.2 innings, giving up two runs on five hits and no walks while striking out seven.

NU starter Shay Shanaman got off to a good start by retiring the first six batter he faced, but then gave up leadoff hits in the third, fourth and fifth innings. The junior righty lasted just 4.1 inning and allowed four runs on eight hits and no walks, while striking out five.

Marcus Ernst picked up OSU’s first hit of the game with leadoff single in the third. Schanaman responded with his fourth strikeout of the game before Nick Erwin reached on an infield single, putting an OSU runner in scoring position for the first time. Schanaman extinguished the threat with a pair of fly outs.

After failing to cash in a leadoff single in the third, the Buckeyes were able to turn Zach Dezenzo’s fourth-inning leadoff single into runs. With one out Kade Kern blasted the first pitch of his at bat over the 400 sign in center field, knotting the game at 2-2. OSU later had the go-ahead run in scoring position following a two-out double from Ernst, but Schanaman got a ground out to up the frame.

OSU started its third straight inning with a single when Erwin started the fifth with a single. Schanaman then got ahead of Sam Wilson 1-2 before the designated hitter untied the game with a two-run home run to left field. Schanaman responded with a strikeout before giving up a single to Dezenzo and the Huskers went to reliever Tyler Martin. The junior left hander came in an got consecutive outs to keep OSU’s lead at 4-2.

After Everitt’s two-out single in the bottom of the first, Pfennig sat down 16 straight before Banjoff led off the bottom of the seventh with a single. Everitt moved Banjoff into scoring position with a sacrifice bunt and then a passed ball put him on third. Pfennig struck out Matthews to put two outs on the board and OSU went to reliever Bayden Root to face Foster. A passed ball on the third pitch of the at bat scored Banjoff and then Foster tied the game at 4-4 with his first career home run.

The tie didn’t last long, as OSU belted its third two-run homer of the game in the top of the eighth. Trey Kissack retired Dezenzo to start the inning and then NU brought in Braxton Bragg, who retired Conner Pohl and then issued a two-out walk to Kern. Bauer steppe put a 0-1 offering over the 381-sign in center field to put the Buckeyes ahead 6-4.

Griffan Smith and TJ Brock combined for two perfect innings down the stretch, including a 1-2-3 ninth from Brock to secure his second save of the season.

Minneapolis – The Nebraska baseball team entered Sunday with a 2-0 record over the first two days of its trip to U.S. Bank Stadium, but then fell to the Ohio State Buckeyes, 6-4, and Iowa Hawkeyes, 3-1. The Huskers now sit at 5-3 on the year after two weeks of play.

Iowa starter Duncan Davitt struck out six and didn’t allow a hit through 5.1 innings. The sophomore right hander ended his day by allowing one run on two hits and two walks over 6.0 innings.

Jake Bunz went 4.0 innings in his second career start and allowed three runs on five hits and two walks, while striking out two.

Iowa broke the scoreless tie in the top of the third with three runs on three hits, including a leadoff double from Brendan Sher. The Hawkeyes got a pair of RBI singles and plated the third run of the frame on a safety squeeze from Brett McCleary.

The Hawkeyes threated in the top of the fifth when they had two on and one out. Tyler Snep lifted a single to centerfield and Ben Norman tried to score on the play, but Jaxon Hallmark cut him down at the plate and Austin Martin was caught in an inning-ending rundown between second and third base.

Hallmark broke up the no hitter with a one-out bunt single in the bottom of the sixth and then Davitt hit Spencer Schwellenbach to bring the tying run to the plate. Davitt was able to induce a 1-4-3 double play off the bat of Max Anderson to put another zero on the board.

Leighton Banjoff led off the bottom of the seventh with a double and the Hawkeyes brought Dylan Nedved from shortstop to the mound. Nedved struck out Jack Stiel, but then Logan Foster put the Huskers on the board with a RBI double. With the tying run at the plate and one down, Nedved got consecutive fly outs to keep Iowa on top, 3-1.

Nebraska was able to get the tying run to the plate in the bottom of the ninth after Anderson led off an reached on a fielding error by third baseman Matthew Sosa. Nedved sat down three straight Huskers to finish off the win and secure his second save of the year.

The Huskers will be back in action next weekend in Iowa City, Iowa, with a three game series against the Hawkeyes. The series is set to start at 4 PM on Friday afternoon at Duane Bank Stadium.