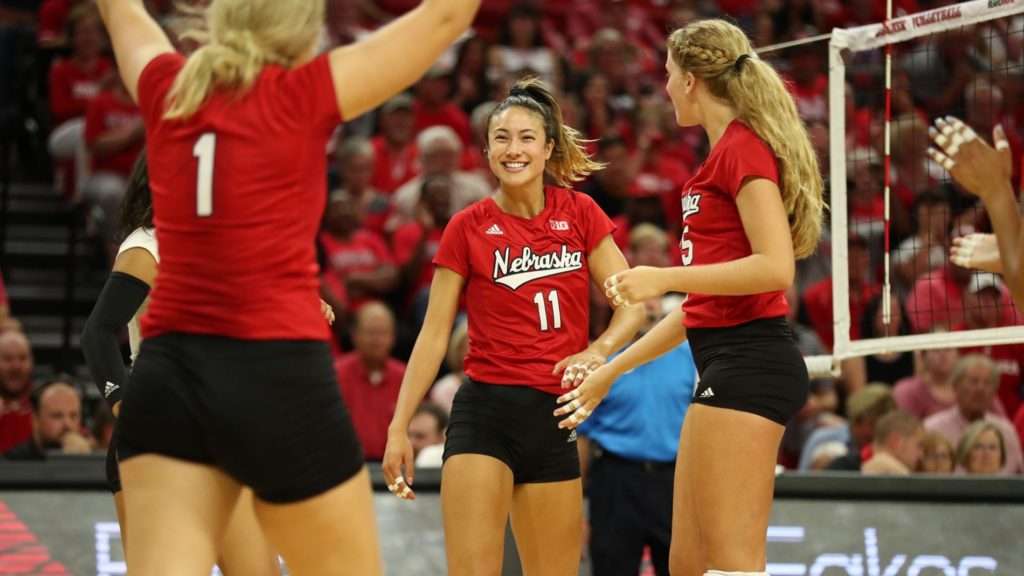 Lexi Sun had 12 kills on .417 hitting to lead the Huskers (15-2, 7-1 Big Ten). Madi Kubik had 10 kills and eight digs while hitting .333, and Jazz Sweet and Lauren Stivrins chipped in six kills each. Callie Schwarzenbach finished with five kills.

Nicklin Hames had 27 assists and nine digs with three kills, and Kenzie Knuckles had a team-best 11 digs.

Erika Pritchard had 10 kills for Maryland.

The Huskers are on the road again next weekend, at Indiana next Friday and at No. 20 Purdue next Saturday.

Set 1: Sun had three kills on three swings early in the match, the third of which started a 5-0 run that put Nebraska ahead 10-6. Schwarzenbach put away a joust at the net, and Sweet had a kill between Maryland hitting errors. After Maryland cut the lead to 11-10, a Terps’ service error and a kill by Kubik made it 13-10 Big Red, and Schwarzenbach added her third, fourth and fifth kills to give NU a 20-15 lead. Sweet had a kill a pair of kills and teamed up with Stivrins for a block, and Nebraska took the first set, 25-19. Schwarzenbach had five kills on .571 hitting to lead the Huskers in the set.

Set 2: NU trailed 5-4 when Stivrins terminated a kill to start a 4-0 run. She combined with Hames for a block, and then Hames dumped a kill to the floor before Kubik hammered an overpass for an 8-5 lead. Kills by Sun and Kubik put the Huskers up 12-7, but Maryland cut the lead to two at 12-10. Sun, Kubik and Stivrins added kills as the Huskers went up 17-12. Sun, Stivrins and Kubik helped the Huskers pull away down the stretch to a 25-16 win.

Set 3: The Huskers began the set with a kill by Sun, a solo block and a kill by Sweet and an ace by Hames for a 4-0 lead. Kubik posted back-to-back kills for a 7-1 lead, and Stivrins pounded a kill before Hayley Densberger served an ace and Sun added another kill for a 13-5 advantage. Hames dumped her third kill, and Schwarzenbach combined for back-to-back blocks, one with Sun and one with Sweet, to keep the Huskers up eight at 16-8. Sweet and Stivrins posted NU’s fourth block of the set, and Megan Miller served an ace for a 22-11 lead. The Huskers’ dominant third set ended the match, 25-13.