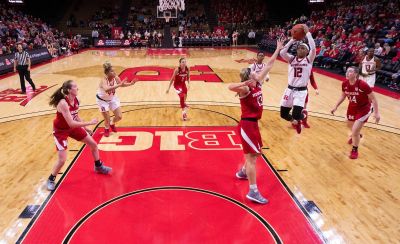 Piscataway, N.J. – Nebraska tied its season high with 12 three-pointers but Rutgers outscored the Huskers 36-20 on points in the paint, as the Scarlet Knights notched a hard-fought 69-65 women’s basketball win over the Big Red at The RAC on Sunday afternoon. Sophomore Ashtyn Veerbeek matched her season high with 14 points by knocking down a career-high four three-pointers to lead the Huskers, who slipped to 13-3 overall and 3-2 in the Big Ten. The 6-2 forward from Sioux Center, Iowa added five rebounds, three assists and a steal. Senior guard Hannah Whitish was the only other Husker to manage double figures with 10 points, including a trio of threes, while adding four rebounds, four assists and a steal, while Leigha Brown, Nicea Eliely and freshman Isabelle Bourne added nine points apiece, while Sam Haiby and freshman Trinity Brady each pitched in seven points. Rutgers improved to 14-2 overall and 4-1 in the Big Ten by winning the turnover battle, 17-6, and converting NU’s turnovers into 21 points. The Huskers return to Lincoln for the start of spring semester classes on Monday before returning to Big Ten road action at No. 17 Maryland on Thursday in College Park. Tip-off is set for 7 p.m. (CT) at the Xfinity Center.