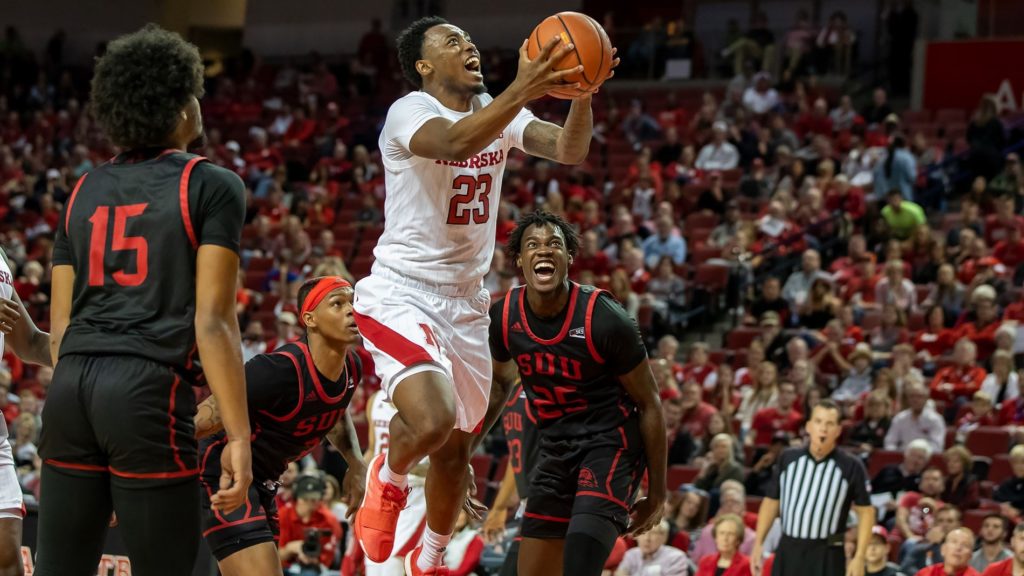 Lincoln – Cameron Oluyitan’s jumper with 3.5 seconds remaining proved to be the game winner, as Southern Utah escaped with a 79-78 double overtime win over the Huskers Saturday afternoon.

Oluyitan, who was one of five Thunderbirds in double figures with 11 points, found a spot the right baseline and knocked down a 15-footer to give SUU the lead for good.

Nebraska had a chance to win or second it to a third overtime, but Cam Mack’s shot at the buzzer rolled off the rim, as the Huskers fell to 0-2 on the season.

Mack put the Huskers in position to win, as he recorded a double-double with 13 points and 11 assists, including finding Jervay Green for the game-tying 3-pointer at the end of regulation. Mack, one of four Huskers in double figures, also added seven boards.

Green finished with 18 points and eight rebounds, while freshman Kevin Cross came off the bench and topped the Huskers with 19 points and added five rebounds. Dachon Burke Jr. rounded out the quartet with 13 points and four boards.

Dwayne Morgan led the visitors (2-0) with 19 points and 11 rebounds, as Nebraska held SUU to 41 percent shooting and forced SUU 18 turnovers, but the Huskers shot just 37 percent and were out-rebounded 58-44.

In the first half, Nebraska used a strong defensive effort to take a 37-26 halftime lead. The Huskers held Southern Utah to 30.3 percent shooting and forced nine Thunderbird turnovers in the opening 20 minutes.

Nebraska’s bench keyed a critical first-half run, scored 11 points in a 16-2 spurt that turned a 12-all tie into a 28-14 Husker advantage after a Cross jumper. Thorir Thorbjarnarson had all seven of his first-half points in the spurt, as NU held the Thunderbirds to just one field goal over nearly 8:30.

Nebraska stretched the lead to 14, at 44-30, with 16:37 left following a Burke 3-pointer and a Green basket, but Southern Utah clawed back into the contest, using a 15-4 spurt to pull within 48-45 with 10:45 remaining in regulation. From there, neither team led by more than five points the final 20 minutes of the contest.

Nebraska led 64-59 after a pair of Green free throws with 4:10 left, but a 6-0 spurt gave the visitors their first lead since the opening minutes on a Dre Marin 3-pointer. Nebraska answered back, as Mack’s driving layup put the Huskers up by one. Southern Utah got a break with 17 seconds left when Haanif Cheatham was called for a foul and Morgan hit both free throws to gave SUU a one-point lead. NU had a gold opportunity to regain the lead, as Mack found Green for an alley-oop, but Green was unable to handle the pass and Morgan was fouled with five seconds left. Morgan hit both free throws to give the Thunderbirds a three-point lead, only to see Green’s buzzer beater send it to overtime.

The Huskers return to action this Friday, Nov. 15, as Nebraska plays host to South Dakota State. Tipoff is set for 8 p.m. and a limited number of tickets are available by visiting Huskers.com/Tickets or calling the NU Athletic Ticket office at 800-8-BIGRED during business hours. Friday’s game will be carried on the Husker Sports Network and televised nationally on BTN.