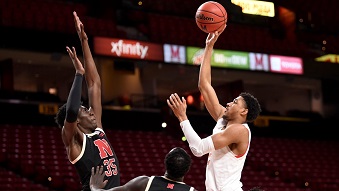 The Nebraska men’s basketball team had 13 steals and forced 17 turnovers at Maryland Tuesday night, but the strong defensive effort was not enough to overcome a cold-shooting night in a 64-50 loss to the Terrapins.

Nebraska’s 13 steals were its most in Big Ten play and its second-highest total this season. NU forced Maryland into a season-high 17 turnovers – six above its season average – but Nebraska scored only four points off those turnovers.

While the defensive effort was strong, Nebraska struggled with its shooting. The Huskers shot just 33 percent in the game, including only 29 percent in the second half, when Nebraska made just 2-of-14 3-pointers.

Aaron Wiggins had 10 points during the decisive run, and he finished with a game-high 21 points, including 15 in the second half. He posted a double-double by grabbing a game-high 11 rebounds. Jairus Hamilton added 15 points for the Terrapins, while Eric Ayala chipped in 14 points.

Nebraska led 7-5 early before Maryland scored six straight points. The Huskers then got back-to-back 3-pointers from Lat Mayen and Allen to grab a 13-11 lead. Maryland answered with a 3-pointer of its own before Nebraska held the Terrapins scoreless for more than five minutes.

The Huskers scored only five points during Maryland’s drought, but it was enough to regain the lead. A pair of Banton 3-pointers stretched the Huskers’ advantage to 21-16, but Nebraska then went more than five minutes without hitting a field goal. Maryland took advantage with a 9-0 run that featured three consecutive 3-pointers.

Trailing 25-21 at the five-minute mark, Banton knocked down a pair of free throws and Allen hit a layup to tie the game. The Huskers then took a 28-27 lead with less than two minutes to play in the half, but Maryland scored the final five points of the half – including a buzzer beater from halfcourt – to take a 32-28 lead into the locker room.

Allen had 10 first-half points for Nebraska, while Banton added eight. The Huskers were 6-of-14 from beyond the arc in the opening half.

Neither team scored in the opening three minutes of the second half before trading 3-pointers. Maryland then got a three-point play from Wiggins – with the benefit of a goaltending call – to take a seven-point lead. But five straight points from Nebraska pulled the Huskers to within two at 40-38 with 12 minutes remaining.

Nebraska tied the game on Webster’s 3-pointer with eight minutes to play, but Maryland responded with a 15-3 run to build its first double-digit lead of the game at 59-47 with 3:47 to play. The Terrapins led by at least 10 the rest of the way.

Nebraska and Maryland will play again tomorrow night. Tipoff is set for 6 p.m.