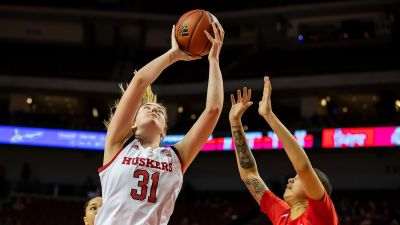 Evanston, Ill. – Nebraska took No. 19 Northwestern to the brink leading 56-51 with under three minutes left, but the Wildcats scored the game’s final nine points to escape with a 60-56 women’s basketball win over the Huskers at Welsh-Ryan Arena on Sunday afternoon. Leigha Brown led Nebraska with 14 points off the bench, including the Huskers’ final two points on a turnaround jumper with 3:05 left, while Kate Cain added a double-double with 12 points, 12 rebounds, seven blocks and a career-high four steals. Nebraska slipped to 16-10 overall and 6-9 in the Big Ten, while Northwestern improved to 22-3 overall and 12-2 in the conference with its fifth consecutive victory.