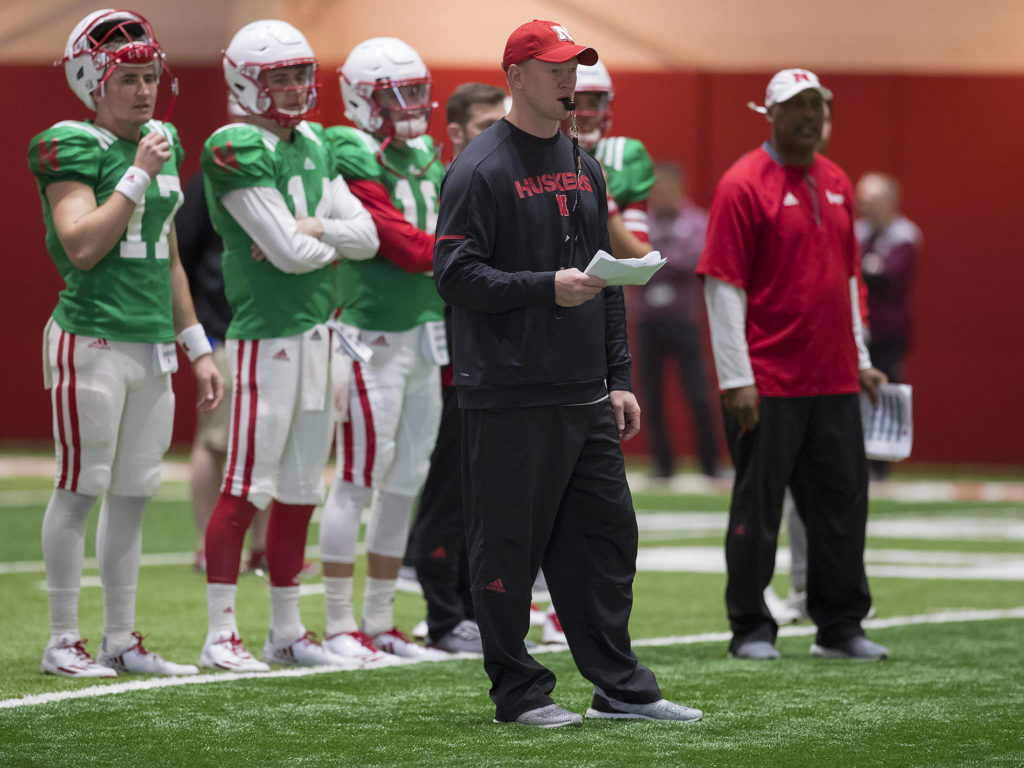 Lincoln, Neb. — The Nebraska football team practiced in full pads to end the first week of fall camp on Friday, working out for nearly two and a half hours while splitting time inside the Hawks Championship Center and outside on the Ed and Joanne Gass practice fields.

Head Coach Scott Frost spoke to the media following the conclusion of practice and talked about the team living up to his expectations from summer workouts moving into fall camp.

“I expected it to be better and it’s better,” Frost said. “I said that before and it’s a lot better. Every position looks better than it did a year ago. The speed of practice looks better than it did a year ago. I’m having a lot of fun coaching this team. Last year there were times it was hard coaching the team, but this year everybody shows up with a smile on their face. I don’t see one person that I don’t want to talk to and they’re having fun. This is a fun team to coach, so there’s just a ton of things that have gotten better and it’s up to us as coaches and players to make sure that improvement leads to success.”

Frost commented on the physicality of practice and how it has been another drastic improvement for the team.

“It’s funny, we’ve had to have talks two nights in a row about slowing them down because we’ve been a little too reckless,” Frost said. “It’s not everybody, but that can lead to injuries on the field. You’ve got to practice like a pro and take care of each other, but I would much rather have to say slow down a little bit than telling them to go faster. I think the toughness and enthusiasm of practice has improved drastically as well.”

Frost spoke about the defensive mentality and focusing on forcing turnovers and three and outs.

“We talked to our defense about getting the ball back,” Frost said. “If a team drives it and we get a turnover and we get the ball back, that can sometimes be just as good as a three and out. The biggest stat for us is going to be turnovers and the other thing I wants to see us improve a little is three and outs. They make a big difference so we can get the ball in better field position offensively.”

Frost finished off with the improvement at the quarterback position all throughout the depth chart.

“I think all the quarterbacks are doing a good job,” Frost said. “We’re vastly improved at that position from the number one guy all the way down the roster. It was a little depressing at times last year going into a few games with one, maybe two healthy quarterbacks. Noah (Vedral) has been throwing the ball as well as I’ve seen him throw it. Obviously, he’s athletic and is familiar with our scheme. Luke (McCaffrey) is doing some really good things throwing the ball, also making a bunch of plays with his legs. He’s picked up the offense really fast. Bunchy (Andrew Bunch) has improved drastically. Matt Masker’s making some good plays, so we’re at a lot better place at that position. I wish our season would come down to 4 by 1 relay with our quarterback group against everybody else’s because we’ve got some guys that can run.”

The Huskers will continue fall camp with practice on Monday, with the first game taking place at Memorial Stadium on Saturday, Aug. 31 against South Alabama at 11 a.m CT.