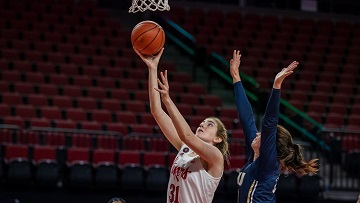 Cain had 10 points and five rebounds at the end of the first quarter to get Nebraska moving after the Huskers fell behind 11-6 in the early going. The 6-5 center from Middletown, N.Y., finished with 14 points on 7-of-11 shooting while adding 11 rebounds, six blocks, an assist and a steal.

Cain helped the Huskers rally to tie the game at the end of the first period, before the Huskers took control in the second. Sophomore Trinity Brady knocked down back-to-back threes to open the second to give the Big Red a 28-22 lead less than a minute into the quarter. The 5-11 guard from Indianapolis finished with career highs of 15 points and five rebounds on the night. Brady went 3-for-3 from beyond the arc and added a traditional three-point play in the best game of her young career.

Fellow sophomore Isabelle Bourne also provided an impressive second-quarter presence, closing the first half with nine points in the final 5:23 on her way to finishing her starting debut with 14 points, nine rebounds, three assists, three blocks and one steal.

Junior point guard Sam Haiby also provided a steady influence throughout the game for the Huskers. The 5-9 guard from Moorhead, Minn., threatened a triple-double, finishing with 14 points, a career-high-matching eight rebounds and a game-high seven assists. She produced 14 points, seven boards and seven assists through the first 30 minutes as Nebraska’s lead ballooned to 71-48 at the end of three periods. Haiby also helped Cain get the Huskers started in the opening period, combining with Cain on an 11-0 run in a 90-second span to give NU a 16-11 lead, after trailing 11-5.

Sophomore Makenzie Helms put all five of Nebraska’s returning players in double figures by scoring all of her career-high 10 points in the second half. The 5-8 guard from East Haven, Conn., added two rebounds and two assists in 16 minutes off the bench for the Big Red.

Annika Stewart made the biggest splash among Nebraska’s five newcomers in the game. The 6-3 forward from Minneapolis, Minn., hit her first five shots from the field on her way to 12 points, seven rebounds and two steals in 16 minutes in her collegiate debut.

Fellow freshman Whitney Brown provided a spark late in the first half as well, helping the Huskers take a 45-35 halftime lead by scoring three points and providing hustle plays to give Nebraska extra possessions late in the half. The 5-8 guard from Grand Island, Neb., finished with five points and four steals in 15 minutes off the bench.

Freshman Ruby Porter and junior Bella Cravens rounded out the Husker point totals by pitching in three points and three rebounds apiece in their Nebraska debuts.

Camryn Hill led all scorers with 19 points – all in the first half for Oral Roberts, which slipped to 0-3 to open the season. Regan Schumacher (11), Ariel Walker (10) and Gem Summers (10) rounded out four Golden Eagles in double figures.

Nebraska returns to action at Pinnacle Bank Arena on Sunday, when the Huskers play host to Idaho State. The Bengals return their top nine scorers from last season, including junior guard Callie Bourne, the older sister of the Big Red’s Isabelle Bourne. Tip time is set for 5 p.m. (CT) with live video available to B1G Network+ subscribers with the audio provided by the Husker Sports Network radio call of Matt Coatney.

Twelve event titles put on the board at Polar Dog