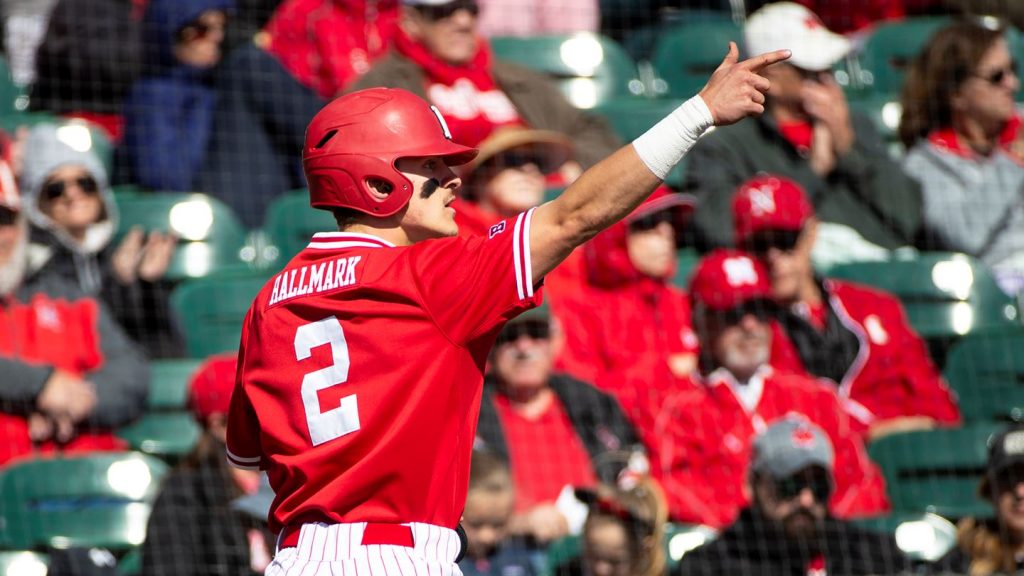 The Nebraska baseball team (3-1) heads to Minneapolis, Minn., this weekend for four games at U.S. Bank Stadium, including two games each against the Ohio State Buckeyes (3-1) and Iowa Hawkeyes (1-3).

NU’s trip to Minneapolis concludes on Sunday with a non-traditional doubleheader. The Huskers and Buckeyes meet at 10 AM before the Huskers end the weekend with a 2 PM against Iowa.

The Huskers are coming off a 3-1 opening weekend against the Purdue Boilermakers. After dropping the series opener on Friday, NU rebounded with three straight wins, including a 4-0 victory on Sunday. Following the 6-5 walk-off loss on Friday, Nebraska outscored Purdue 21-2 over the final three games of the series.

Ohio State has also started the 2021 season with a 3-1 record, as it played Illinois last weekend in Greenville, S.C. The Buckeyes took the first three games of the series before the Illini avoid a four-game sweep with a win in the series finale.

Iowa was also in Round Rock, Texas, last weekend and went 1-3 against Michigan. The teams split the first two games before Michigan outscored the Hawkeyes 18-4 over the final two contests to take the series.

All four games this weekend will be carried on BTN+, a online streaming service through the Big Ten Network.

Fans can listen to Ben McLaughlin and Nick Handley call the action this weekend on the Learfield/IMG College Husker Sports Network. Every game this season can be heard for free on Huskers.com and the Official Nebraska Huskers App for both iOS and android devices.

Last Time Out
Nebraska was in Round Rock, Texas, last week and took three of four from the Purdue Boilermakers. Following the 6-5 walk-off loss on Friday, Nebraska outscored Purdue 21-2 over the final three games of the series.

Next Up
Nebraska will head to Iowa City, Iowa, next weekend for three games with the Iowa Hawkeyes.

The Huskers have lost three straight series in Iowa City and are 4-8 at Duane Banks Stadium since joining the Big Ten Conference. In four trips to Iowa City the Huskers lone series win came in 2013 when they won 2-of-3.

Leading Off
• For the third time in four seasons the Huskers have started the year 3-1. Nebraska started the 2019 season by taking 3-of-4 at UC Riverside. The Huskers started 2018 by splitting a pair of games with UC Riverside and won both games against Washington State in Tempe, Ariz.

• 10 players made their Husker debut last weekend in Round Rock, including true freshmen Max Anderson, Brice Matthews and Jack Steil. Anderson and Matthews started all four games, while Steil played in two games, including one start.

• True freshman Max Anderson is tied for second in the conference with a .533 batting average (8-for-15). Northwestern’s David Dunn leads the league with a .538 average (7-for-13).

• Nebraska’s pitching staff is one of four in the conference to not surrender a home run yet, joining Michigan, Ohio State and Maryland.

• Jaxon Hallmark is in a three-way tie for first in the conference with three stolen bases.

Scouting the Buckeyes
• Ohio State started 2021 with a 3-1 series win against Illinois last weekend in Greenville, S.C. The Buckeyes took the opener, 6-3, in 13 innings and then swept a doubleheader on Saturday, 6-5 and 12-6. Illinois posted a 8-0 shutout in the series finale to avoid a sweep.

• Greg Beals is in his 11th season as head coach of the Buckeyes. He enters the weekend with a 306-239-1 overall record at OSU. Beals has guided the Buckeyes to three NCAA Regional appearances in the last five years and has led OSU to two Big Ten Tournament titles (2016 and 2019).

• Garrett Burhenn started the season opener and he was the only Buckeye starting pitcher to go more than 4.0 innings on the weekend, as he allowed two runs on four hits and three walks, while striking our three over 6.0 innings. OSU’s other three starters failed to pitch into the fifth inning, including Seth Lonsway (2.2 innings), Jack Neely (4.0 innings) and Will Pfennig (2.2 innings).

The Series with Ohio State
• Nebraska leads the all-time series, 13-12. The teams have met 23 times since Nebraska joined the Big Ten and NU leads that series, 12-11.

• Ohio State has won the last three games dating back to 2018.

• The teams has met seven times on a neutral field, including five times at the Big Ten Tournament. OSU holds a 4-3 advantage in neutral site games.

Scouting the Hawkeyes
• Iowa opened the 2021 campaign last Saturday with the first of four games against the Michigan Wolverines in Round Rock Texas. Michigan took the season opener, 4-2, before Iowa responded on Sunday with a 8-3 win in the first game of a doubleheader. Michigan took game two of the double dip, 7-0, and secured a series win with a 11-4 win in the series finale on Monday.

• In three losses last weekend the Hawkeyes were outscored 22-6.

• The Hawkeyes have yet to hit a home run in 2021, but did produce 11 doubles against Michigan last week over four games.

• Three of Iowa’s four starting pitchers went 3.1 innings or less last week against Michigan. Trent Wallace was the only starter go work past the fourth innings, as junior left hander allowed two runs on three hits and struck out eight over 5.0 innings. Duncan Davitt (3.1 innings), Drew Irvine (3.0 innings) and Cam Baumann (3.0 innings) all failed to work past the fourth inning.

• Cam Baumann allowed six runs (all earned) on five hits over 3.0 innings, but did strike out six.

• Rick Heller is in his eighth season at Iowa, taking the reigns in 2014. The 2021 season marks Heller’s 35th as a collegiate head coach and he entered the year with a career record of 904-703-4. Under Heller the Hawkeyes have advanced to two NCAA Regionals, and claimed the first Big Ten Tournament title in program history. The 2017 title was Iowa’s first since winning the regular season crown in 1990. Heller is one of two Iowa head coaches to lead the program to the NCAA Tournament

The Series with Iowa
• Nebraska and Iowa have split 38 previous meeting, 19-19.

• The Huskers have lost three straight series in Iowa City and are 4-8 at Duane Banks Stadium since joining the Big Ten Conference. In four trips to Iowa City the Huskers lone series win came in 2013 when they went 2-1.

• Matthews started at second base and hit in the No. 2 spot in the lineup in all four games. Had one double and four RBIs in Saturday’s 10-0 victory.

• Steil started the series finale at first base. Had a double in his first career at bat and hit a two-run homer in the top of the ninth to extend NU’s lead to 4-0.

Shay the Starter
After making 25 relief appearances over his first two years at Nebraska, Shay Schanaman made his first career start last Saturday. The right hander tossed 6.0 shutout innings. He allowed one hit, three walks and he struck out five.