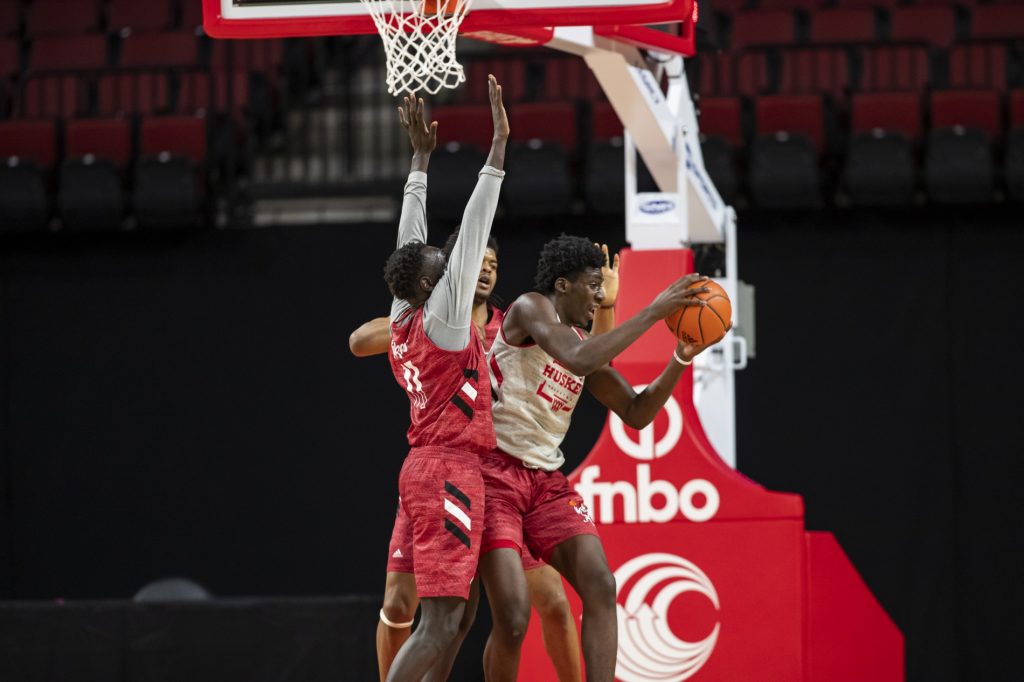 Nebraska caps a busy first week of the season on Tuesday evening, as the Huskers play host to South Dakota. Tipoff at Pinnacle Bank Arena is slated for 8 p.m.

The matchup between the Huskers and Coyotes will be carried nationally on BTN with Kevin Kugler and Nick Bahe on the call. The game can also be streamed via the web, smartphones, tablets and connected devices through the Fox Sports app.

Nebraska comes off a 79-57 win over North Dakota State last Saturday. The Huskers put four players in double figures, led by 22 points from Teddy Allen, and limited the Bison to just 17 percent shooting in the second half. Allen, who scored 17 of his 22 points in the second half, added seven rebounds and five steals for the winners. Trey McGowens chipped in a season-high 19 points and five rebounds, while Dalano Banton and Lat Mayen added 12 points apiece, as Nebraska never trailed against the Bison. The Huskers held NDSU to 29 percent, the lowest opponent by a Husker opponent in 70 games.

The Huskers’ strength in the early season has been its balance with five players averaging double figures and a sixth averaging 8.7 points per game. Allen enters the week ranked 10th in the Big Ten in scoring at 17.7 ppg, while Dalano Banton ranks in the top 20 in the Big Ten in scoring (14.7 ppg, 19th), rebounding (7.3 rpg, 14th), and assists (6.3 apg, fourth) while posting a nearly 4-to-1 assist-to-turnover ratio.

The Huskers will continue their season-opening homestand on Sunday, Dec. 6, when Nebraska hosts Florida A&M. Tipoff is slated for 1 p.m. and the game will be televised on BTN.

PLAYER SPOTLIGHT
Teddy Allen enters Tuesday’s game ranked 11th nationally with 4.3 steals per game. He is one of only two players nationally with multiple games with at least five steals.

NUMBERS TO KNOW
4- Blocked shots by Dalano Banton vs. McNeese State, which was the most by a Husker since Isaiah Roby had four blocks against Wisconsin in the 2019 Big Ten Tournament. NU didn’t record four blocks as a team in 23 of 32 games last season.

16- Nebraska led the Big Ten and ranked 16th nationally in pace last season by KenPom. It was the highest finish of any Big Ten program in the KenPom database since the site began tracking in 2001-02.

39 – Steals for NU, which is second nationally entering the week. South Dakota will face the top two teams in steals this week in Nebraska and Kansas City (40, 1st).

41 – Nebraska’s 3-point attempts against Nevada was a single-game record, breaking the mark of 38 against Kansas in 2002. It ranked eighth in Big Ten history and was the most since Iowa took 42 attempts against Savannah State on Dec. 22, 2018.

102 -Nebraska’s 102 points against McNeese State was the first time NU topped the 100-point mark since the 2018-19 opener. It also marked the ninth time in school history that NU scored 100+ points in an opener.

SCOUTING SOUTH DAKOTA
South Dakota is 0-2 on the season following losses to Colorado (84-61) and Drake (69-53) in the Little Apple Classic last week. The Coyotes returned one starter from a team that went 20-12 and finished third in the Summit League with a 10-6 mark. Coach Todd Lee is in his third season and improved USD’s win total from 13 to 20 in his second season. Prior to taking the Coyotes’ job, Lee spent five seasons as an assistant at Grand Canyon University and eight seasons leading Kentucky Wesleyan, taking the school to five straight NCAA Division II Tournaments.

While the Coyotes roster features 11 new players, senior guard Stanley Umude returns as one of the best players in the Summit Leauge. Umude, a 6-foot-6 guard, averaged 16.7 points, 6.3 rebounds and 2.1 assists per game last season and is averaging a team-best 17.0 points per game in the first two contests. Sophomore guard A.J. Plitzuweit joins Umade in double figures at 11.5 ppg. USD has shot just 35 percent in the first two games, while opponents are shooting 42 percent.

South Dakota has a pair of players with Nebraska ties. Sophomore forward Brady Heiman began his college career at Nebraska, where he played in 30 games in 2018-19. Sophomore guard Kanon Koster is a Kearney, Neb., native who began his career at UNK. Graduate assistant Johnny Trueblood played at Nebraska (2015-16, 2017-19), helping the Huskers to consecutive postseason appearances after walking on to the program.

Nebraska is 32-5 all-time against South Dakota dating back to 1911, but the teams have played only three times since 1984. The Huskers won the last meeting, 73-61 on Dec. 3, 2016. In that game, Jack McVeigh’s 16 points led five Huskers in double figures. The Huskers are 82-11 all-time against the current Summit League members following Saturday’s win over North Dakota State.

LAST TIME OUT
Nebraska used a 19-4 game-opening surge and a huge second half from Teddy Allen to post a 79-57 victory over defending Summit League champion North Dakota State Saturday afternoon.
Allen scored 17 of his game-high matching 22 points in the second half, including seven points in a 2:02 span late in the game as Nebraska pushed its lead to 20 points for the first time with four minutes left. Allen added seven rebounds and a game-high five steals to help the Huskers improve to 2-1 while the Bison slipped to 0-2.

Trey McGowens added 19 points as four Huskers finished the game in double figures. Dalano Banton came within striking distance of a triple-double with 12 points, nine rebounds and eight assists before exiting the game with two minutes left and the Huskers leading 74-51. Lat Mayen rouded out the Huskers in double figures with 12 points, including a trio of three-pointers.

Nebraska led from start to finish thanks to a hot shooting start. The Huskers opened 4-of-5 from three-point range beginning with a three from Thorir Thorbjarnarson, followed by a three from Allen before Mayen’s second triple in a 40-second span gave the Big Red a 19-4 lead just 5:47 into the game.

North Dakota State rallied to trim the Husker margin to seven points on three occasions in the half, with the last one coming on a buzzer-beating three-pointer by Jaxon Knotek to cut NU’s margin to 43-36 at halftime.
Although NDSU went to the locker room with some momentum, Allen and Mayen quickly shot Nebraska out to its biggest lead of the game at the time (53-37) in the opening five minutes of the second half. Allen scored the first two points of the half before Mayen drained his third three-pointer to make it 48-36 with 18:35 left. After a free throw by North Dakota State, Allen sank a three with 15:41 left, before scoring again on a driving layup with 15:07 remaining to put the Huskers up 16 points for the first time. North Dakota State was never able to cut the margin to single digits the rest of the way.

HUSKERS GET JUMP ON OPPONENTS
One constant during the Huskers’ first three games is getting off to quick starts. NU has outscored its three opponents by a combined 34-9 prior to the first media timeout. Againt North Dakota State, the Huskers jumped out to a 16-4 lead in the first segment and never trailed against the Bison.

STEALS = BASKETS
Nebraska’s length on the defensive end has been disruptive during the early portion of the campaign. The Huskers enter the week ranked eighth nationally with 13.0 steals per game, a total which is second in the Big Ten. NU has taken advantage of those turnovers, averaging 26.7 ppg off of opponent turnovers in the first three games.
• Nebraska has 10+ steals in the first three games, the first time the Huskers have had 10+ steals in three straight games since the 2016-17 season. That is the only time since 2010 that the Huskers have accomplushed that.
• If Nebraska gets 10+ steals against South Dakota on Tuesday, it will mark the first time it has happened in four or more games since a seven-game stretch spanning the 1998-99 [Texas A&M, vs. Texas Tech (B12), vs.Kansas (B12), vs. UNLV (NIT), at TCU NIT)] and 1999-2000 (Eastern Illinois, Southern Miss) seasons.

A UNIQUE POINT GUARD
It is not often that you a see a point guard handling jump ball duties, but Dalano Banton is not your typical point guard, and NU coach Fred Hoiberg is finding ways to incorporate Banton’s unique skills. The 6-foot-9 sophomore provides a unique focal point to the Huskers’ attack and is averaging 14.7 points, 7.3 rebounds and 6.3 assists per game. He joins Illinois’ Ayo Dosunmu as the only Big Ten players and just two of seven players nationally averaging 14 points, 6.0 rebounds and 6.0 assists per game through Sunday’s games. Banton comes off his best game of the season, finishing with 12 points, nine rebounds and eight assists in the win over North Dakota State.

TEDDY BUCKETS
Junior college transfer Teddy Allen has lived up to his billing as an elite scorer. The 6-foot-6 junior guard leads Nebraska at 17.7 points per game while also chipping in 6.0 rebounds and 4.3 steals per game. Allen, who averaged 31.4 points per game at Western Nebaska Community College last season, has been in double figures in all three games, and comes off a 22-point performance against North Dakota State. It was his fourth career 20-point game, as he had three as a freshman at West Virginia in 2017-18.