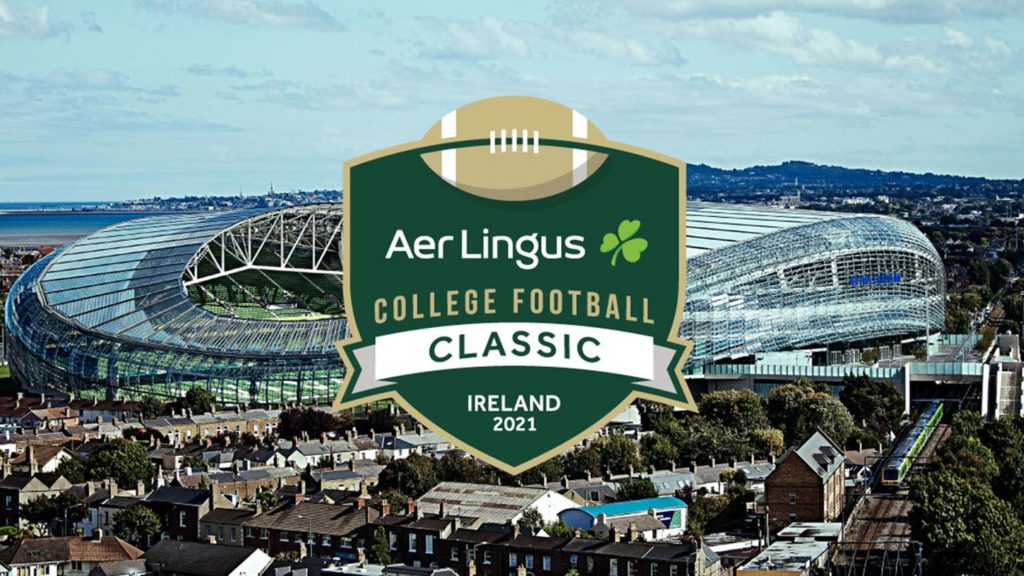 Nebraska Athletic Director Bill Moos, and Illinois Director of Athletics Josh Whitman, in partnership with Irish American Events Limited, announced Monday that the 2021 Nebraska-Illinois game will be played at Aviva Stadium in Dublin, Ireland. The game will open the 2021 season and will be played on Saturday, Aug. 28.

The Aer Lingus College Football Classic at the Aviva Stadium will be the second game in a new five-game series of college games in Dublin. The first of those games will be a season-opening matchup between Navy and Notre Dame in 2020.

“Playing a game in Ireland provides another way to spread the Nebraska brand, and in this case on an international stage,” Moos said. “We are always looking for new scheduling opportunities and when this was presented, Coach Frost and I decided this would be an experience of a lifetime for the student-athletes in our program.  This will also be a great trip for our fans, and knowing how Husker fans travel it will be great to see Dublin, Ireland turned Red.”

Nebraska was originally scheduled to play at Illinois on Nov. 13, 2021. The matchup in Dublin will be Nebraska’s first game outside of the United States since the Huskers took on Kansas State in the 1992 Coca-Cola Bowl in Tokyo, Japan.

“We look forward to taking our team to Ireland to kick off the 2021 season against Illinois,” Nebraska Head Coach Scott Frost said. “This will provide great exposure for the Nebraska football program and the Big Ten Conference. Our first priority for the trip will be to play a football game, but it is also going to give our players a chance to visit a part of the world most of them will not have seen.”

The Nebraska-Illinois game in Dublin as part of the Aer Lingus Football Classic will bring great excitement to Ireland, according to Prime Minister Leo Varadkar.

“It’s great to see new teams getting involved in the Aer Lingus College Football Classic,” Varadkar said. “Tens of thousands of fans are expected to make the journey for each game in the series over the next five years, bringing with them a huge boost for the economy.

“Illinois and Nebraska players and fans can look forward to the best of Irish hospitality. The series will showcase Ireland as a location for international events and tournaments and put our world-leading tourism sector front and centre. The 2020 game between Notre Dame and Navy is fast approaching and now sports fans have another great occasion to plan for in 2021.”

In addition to taking on Illinois in Ireland in Week Zero, Nebraska also announced the completion of its 2021 non-conference schedule on Monday.

Ticket and Travel Packages
Official travel and hospitality are now available for the ultimate experience which include exclusive game tickets. Choose from a variety of destinations including Dublin, Galway and County Kerry, courtesy of Anthony Travel. All packages include hotel accommodations, Husker welcome party, excursions and much more. Learn more and secure your exclusive premium game tickets with a low deposit of $250 per person by visiting Huskers2Ireland.com.

The Aer Lingus College Football Series will have a very strong Irish-American influence. Not only will there be the usual college football fanfare with lots of fun events celebrating the red, white and blue including marching bands, cheerleaders and tailgating parties, but there will also be a great celebration of the close Irish-American links that are so highly valued. The teams will compete each year for the Keough-Naughton College Football perpetual Trophy, acknowledging the contribution to Irish-American society of Don Keough and Martin Naughton.

Organizers and Sponsors
The game will be organized by Irish American Events Ltd., which is a joint venture between Anthony Travel and Corporate.ie, which have been involved in college football games in Ireland previously. The other key partners who will drive the game in both Ireland and America are Failte Ireland, Tourism Ireland and Dublin City Council. Further details can be found on collegefootballireland.com.