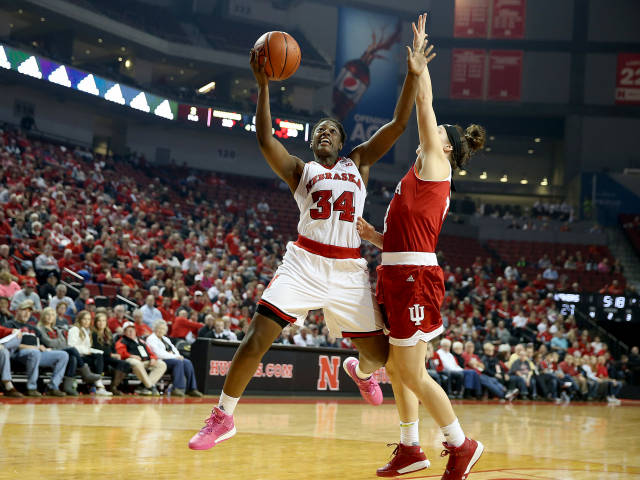 Lincoln – Jessica Shepard posted her Nebraska freshman-record 10th double-double and Jasmine Cincore scored a career-high 16 points, but it wasn’t enough to stop the Huskers from falling to Indiana 79-68 Wednesday night at Pinnacle Bank Arena. With the loss, Nebraska slipped to 17-11 overall and 8-9 in the Big Ten, while Indiana improved to 19-10 overall and 11-6 in the conference. The Huskers, who played without senior starting guards Rachel Theriot and Kyndal Clark for the second straight game because of injuries, were led by 17 points from sophomore Natalie Romeo. She added three rebounds, three assists and three steals. Romeo scored 14 of her points in the first half to shoot Nebraska to a 39-38 halftime lead, despite first-half foul trouble for Shepard and fellow freshman starting forward Rachel Blackburn.

After leading by one at the half, the Huskers watched the hot-shooting Hoosiers take control in the third quarter. Indiana, which went just 2-for-16 from three-point range in the first meeting between the two teams, hit 10-of-16 threes through three quarters. Their fourth three of the third quarter, a shot-clock buzzer beater with six seconds left from Tyra Buss, gave IU a 60-51 lead to start the fourth quarter. Buss finished with 22 points, six rebounds, three assists and three steals, while Alexis Gassion added a career-high-matching 22 points, five boards and a game-high six assists for Indiana. As a team, Nebraska hit 48.3 percent (28-58) of its shots from the field, including 5-of-16 threes, while knocking down just 7-of-12 free throws. The Huskers were outrebounded 30-29, and lost the turnover battle 18-16. Indiana hit 27-of-52 attempts (.519), including a blistering 57.9 percent (11-19) from three-point range. The Hoosiers also knocked down 14-of-21 free throws, as the Huskers were forced to foul down the stretch . Nebraska closes regular-season home action on Sunday when the Huskers take on Northwestern at Pinnacle Bank Arena. Tip-off with the Wildcats is set for 3 p.m.